How Prayer Stopped a Kansas Storm 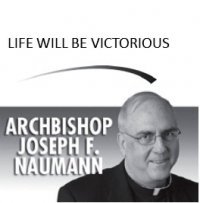 By Archbishop Joseph Naumann | Naumann is the Archbishop for the diocese of Kansas City, Kan.

Jan. 1, 2010, The Leaven, newspaper of the Archdiocese of Kansas City-Kansas

This past Sept. 8, the feast of the birth of Mary, I had the privilege to dedicate a new Marian grotto on the campus of Benedictine College. The college was founded a little over 150 years ago — approximately the same time that Mary appeared to St. Bernadette at Lourdes. In part because of this historical connection, but even moreso because of the beautiful Marian devotion of so many of the Benedictine students, the leadership of the college had decided to erect, at a very prominent location on the campus, a special outdoor space for prayer in honor of Mary.

The schedule for Sept. 8 began with a 5 p.m. Mass in St. Benedict’s Abbey church, followed by a procession to the grotto for the blessing and dedication. At 3 p.m. on the afternoon of Sept. 8, it was pouring rain at our chancery offices. All the weather reports predicted rain throughout northeast Kansas for the rest of the afternoon and evening.

I called President Minnis shortly after 3 p.m. on Sept. 8, encouraging him to get the “Memorare Army” praying for good weather for the grotto dedication. He promised to rally the troops!

On my drive to Benedictine College that afternoon, the rain persisted right to the city limits of Atchison. As I arrived at the abbey church around 4:30 p.m., there was no rain. Yet, the skies looked ominous. I feared that by 6 p.m., the time for the blessing of the grotto, Atchison would also be enveloped in rain.

When we processed out of the abbey church to go to the grotto, the sun was shining. The weather was perfect for the blessing of the grotto. Much to my amazement, it did not start raining in Atchison until 9 p.m., well after the outdoor festivities were concluded.

President Minnis, some weeks later, told me that one of the college staff happened to be in Kansas City the night of the grotto dedication. Fearing that the rain had dampened the dedication ceremony, he was talking to an air traffic controller about the day’s weather. The controller expressed his amazement about the storm system that had rolled across Kansas at a steady clip, only to stall inexplicably at 4 p.m. outside of Atchison for approximately 5 hours.