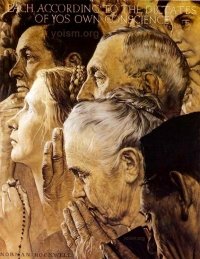 The Church is raising the alarm: Our religious liberty is under attack.

Cardinal Francis George was prophetic in 2009 when he said the White House had taken “the first step in moving our country from democracy to despotism.” That was when President Obama broke the promise he made to Catholics at Notre Dame and made the decision to strip conscience rights from Catholic health care professionals, a ruling that could force them to either perform abortions or lose their jobs.

Now, Bishop Lori has testified to Congress that the march toward despotism continues. “The Bishops of the United States have watched with increasing alarm as this great national legacy of religious liberty … has been subject to ever more frequent assault and ever more rapid erosion,” he said.

Forced Contraception Coverage. Health and Human Service has issued a regulation mandating contraceptive coverage from almost all private health insurance plans. “There is an exception for certain religious employers,” said Lori, “but to borrow from Sr. Carol Keehan of the Catholic Health Association, it is so incredibly narrow that it would cover only the ‘parish housekeeper.’”

–Last Spring, Health and Human Services issued a rule that bars the Church from help refugee and human trafficking victims who are kids separated from their parents. The regulation says to work with them you have to be willing to perform abortions on them to be allowed to help them.

— The State Department’s USAID bars Catholic groups from feeding the hungry, clothing the naked and caring for the sick overseas unless they promise to give them condoms, too.

Government Regulating Ministers. Lori also cited the test of the “ministerial exception” now before the Supreme Court. The exception recognizes the primacy of freedom of religion by exempting churches from federal oversight in the hiring and firing of ministers.

Catholics Officially Bigots. Said Lori, “The federal Department of Justice (DoJ) has ratcheted up its attack on the Defense of Marriage Act (DOMA) by mischaracterizing it as an act of bigotry,” said Lori. So now, according to the Department of Justice, Christian (and Jewish, and Muslim) belief about marriage amounts to bigotry. Lori cited several examples:

— In Illinois, Catholic Charities has been driven out of the adoption and foster care business, because it recognizes the unique value of man-woman marriage for the well-being of children.” “Religious liberty is not merely a privilege that the government grants us and so may take away at will,” he said. “Religious liberty is prior to the state itself.”

In First Things, Los Angeles Archishop Jose Gomez made the connection between Catholic rights and American freedom: “America’s founders understood that our democracy depends on Americans’ being moral and virtuous. They knew the best guarantee for this is a civil society in which individuals and religious institutions were free to live, act, and vote according to their values and principles. … At stake are not just our liberties but also the future character of our democracy. ”

In other words: In the debate over religious freedom, the real issue at stake is the soul of America. At stake is what John F. Kennedy called “the revolutionary beliefs for which our forbears fought … the belief that the rights of man come not from the generosity of the state, but from the hand of God.”

Cardinal George is right. Once we lose that, American democracy will not have long to last.