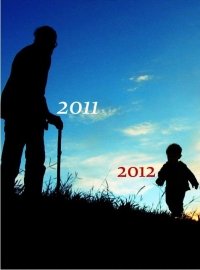 As 2012 approaches, here’s a quick run-down of events from the past year that will impact the Church in America in our time, in no particular order.

Tim Drake and others have noted the big influx of religious vocations sparked by Pope John Paul II’s Denver World Youth Day. At Benedictine College, at least two leading monks trace their vocations to that 1993 event. But apart from the event itself, Denver marked a “metanoia” for America’s Church. That was when we realized the faith could be serious and energetic, and that it wasn’t just the bastion of old age. Ever since, Americans have been organizing pilgrimages to ship young young people to World Youth Days around the world.

The Denver metanoia didn’t just produce many religious and priestly vocations, it produced Catholic family vocations too. And in 2011, babies born in 1993 are turning 18 and beginning their Freshman year in college. The renaissance of faithful Catholic colleges and universities that America has witnessed is therefore booming – and many of the schools are maturing to meet the new demand.

It is hard to overestimate the power of universities to change a culture. A Spanish Marxist once said “give us 10 universities and we will change the face of Europe,” and that is what happened. As Catholicism becomes even more of an intellectual countercultural force in America, developing leaders convinced of its truth and its importance, its influence will grow exponentially.

For years Catholics have been alarmed and saddened by a steady drumbeat of news stories about Catholic sexual abuse, which often recounted incidents from decades past. But the storyline was: “That awful Catholic Church is so out of touch they allowed child sex abuse to occur in their midst!” The problem: by focusing on that sub-story, the media has been ignoring the even more important story: “There is an enormous child sex-abuse epidemic that our society is ignoring, a problem so pervasive that even religious institutions are caught up in it.”

The Associated Press reported about the widespread sex abuse problem in the public schools, but the series got no traction. After 2011, the tragedy of Jerry Sandusky at Penn State and the burgeoning Hollywood casting scandal could change that. If the media gets serious about rooting out child abuse in the society at large, then the Catholic Church can even switch from villain to important ally. Thanks to the media’s attention, Catholics have now become the leaders in protecting children, and can share the knowledge we have gained from our successes and failures.

The Catholic Church was the great shaper of “mass media” for centuries as we pioneered communicative art forms from painting and sculptures to manuscripts and cathedrals. The Church learned to speak to the masses in ways that informed their minds, moved their hearts and strengthened their wills.

But in the 20th century, the Church slipped from being at the vanguard of media to being the trailers. The Church’s use of the forms of communication was mired in mediocrity. The Catholic Church of Michelangelo and illuminated manuscripts had birthed the Catholic Church of felt dove banners and “We Celebrate” workbooks. The Church had triumphantly embraced the radio, then stopped as the world kept moving.

Several developments are changing that. CatholicVote.org’s own pro-life Internet videos are one example. But the best example of the new Catholic excellence in media is Father Robert Barron’s Catholicism series. This DVD review of the beauty, truth and goodness of our faith is itself a model of beauty, truth and goodness. And it is not just a great achievement of its own. It is a sign that our talk of the New Evangelization is bearing real fruit.

This year has been a great year for pro-life victories. So much so that Lifesite news is celebrating with “The 12 Days of Pro-Life Christmas: Marking Victories in 2011.” Among them: The House voted twice to eliminate Planned Parenthood funding, five states have restricted abortion coverage by insurance, and 70 pro-life bills have passed in statehouses.

The impact of pro-life victories is deep and wide. The abortion issue is a “gateway issue.” Once you adopt a position on abortion, a lot of other issues fall into line behind it. Once you believe that innocent human life needs to be protected even when you can’t see it, you have to reset your entire worldview: To be pro-life reverses relativism, moral indifferentism, and utilitarianism.

And, even greater, in this season when we watch It’s a Wonderful Life we can remember that each human being allowed to be born instead of aborted will help transform America in a unique and unrepeatable way.

In a stinging article this month, Miami, Fla., Archbishop Thomas Wenski explains how the Obama administration “is running roughshod over conscience protection provisions long part of the law that find their justification in the First Amendment guarantee of freedom of religion, a foundational human right.” Chicago’s Cardinal Francis George has called the administration’s actions “the first step in moving our country from democracy to despotism.”

These attacks on conscience might mean the end of Christians’ use of public institutions to serve the world, Father Robert Barron suggested in remarks at Notre Dame’s Ethics & Culture Center. We may soon no longer be able to operate adoption agencies or service organizations. Our service will have to take a different form.

The redefining of marriage in New York ― the biggest defeat for traditional marriage since California ― does not pose a threat because of what it does for homosexuals so much as for what it does to the rest of our marriages.

The state is only in the marriage business to start with because marriage is the unique procreative relationship that creates, protects and nurtures the next generation. The state has an interest in guarding and encouraging that. To redefine marriage to include homosexual relationships changes the meaning of marriage for all couples. Once that’s done, marriage is just a piece of paper from the government acknowledging that a couple said “I love you in a special way” in front of a witness. Marriages become government-issued Valentines.

The ramifications for the Church and the family are huge. The fundamental building block of society is the family, not the couple. The family glues one generation to the next one (and to the previous one) and inspires us to make life continually better. With marriage redefined, the family will no longer be protected by the state any more than any other relationship. As Pope John Paul II put it, “families will be the first victims of the evils that they have done no more than note with indifference.”

7. Liturgical Changes in the English-speaking World

If you think in terms of 100-year blocks, a lot of the news events I have mentioned will pale in their significance to the American Church compared to the liturgical changes Pope Benedict got done this year.

In 100 years, the loss of marriage will play itself out as the culture learns the hard way that the definition of marriage wasn’t just an arbitrary thing after all. Conscience battles will drive our increasingly faithful Church to be more inventive and less bureaucratic in our works of mercy. Just as abortion replaced slavery, the devil will find some other seemingly unthinkable evil to dupe the public into accepting once abortion is gone.

But the change in the Liturgy will be more like a tectonic shift: Slower and more significant. A generation of Catholics will grow up in the Church Vatican II intended, learning a theologically accurate creed (believing in things visible and invisible, not just “seen and unseen;” believing that Christ is of the same substance, not “one in being” with the Father); repeating a more befitting penitential rite and forming their relationship with Christ with a more reverent Eucharistic rite. This liturgy teaches us how to be like Christ. The new liturgy will help raise up Catholics who understand that God is unapproachably great, our sin against him is a disaster of eternal proportions, and his renewal of mankind is as quiet, subtle, total and unstoppable as the dewfall.