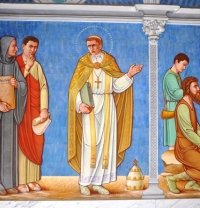 We have named the Gregorian Institute after him because Gregory exemplifies what Benedictine College aims for: “to prepare its graduates to transform the world through their commitment to intellectual, personal, and spiritual greatness.”

Pope Benedict XVI calls Gregory “one of the greatest Fathers in the history of the Church.” The Church names him one of four Doctors of the West. Father Gerard Senecal OSB added, at Mass this morning, that he was also the first Benedictine pope … and the great biographer of St. Benedict.

When his father died, he turned his large house into a monastery and was named one of Rome’s seven deacons. Gregory was a clear choice for pope, but he refused the honor, and hid in a cave in disguise to try to get away.  Nonetheless, his 14-year pontificate changed the course of the Church.

Pope Benedict XVI spoke about the great doctor of the Church in a 2008 audience. “Abundant documentation has been preserved from his governance thanks to the Register of his Letters (approximately 800),” wrote Pope Benedict XVI, “reflecting the complex questions that arrived on his desk on a daily basis.”

Gregory adopted the papal title still used today, “servant of the servants of God” and sent St. Augustine of Canterbury to convert England. And he did it all while suffering illnesses that easily could have caused him to give up.

Calling him a great diplomat and peacemaker, Pope Benedict praises the way Gregory handled the Lombard crisis in Rome.

“Gregory constantly focused on three basic objectives: to limit the Lombard expansion in Italy; to preserve Queen Theodolinda from the influence of schismatics and to strengthen the Catholic faith; and to mediate between the Lombards and the Byzantines in view of an accord that guaranteed peace in the peninsula and at the same time permitted the evangelisation of the Lombards themselves.”

Pope St. Gregory the Great, pray for us! Give our students the wisdom to face the crises in our world in a way that does not just solve problems, but transforms challenges into opportunities.

Tom Hoopes is writer in residence at Benedictine College in Atchison, Kan., where he teaches in the Journalism and Mass Communications department and edits the college’s Catholic identity speech digest, The Gregorian.