The Army’s Approach to Leadership 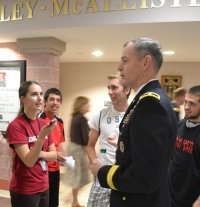 Gen. MacFarland heads to the auditorium after an extended session with Gregorian Fellows Oct. 4.

Remarks by Gen. Sean B. MacFarland.

In 2006, Col. Sean B. MacFarland implemented a new U.S. military strategy in Iraq using a large measure of trust in local leaders. By taking that risk, he accomplished something that had eluded other military commanders in the area.

It’s a real privilege to be here.  And, as President Minnis said, I’ve been wanting to do this for a little while.  I just haven’t had the opportunity.  I visited Benedictine College quite some time ago when I was a young major attending the commanding general staff college, and my daughter came up here for violin lessons, and we always thought, “wouldn’t it be nice if Maggie went to Benedictine?”

I’m proud to be here. This is a great campus, a great school, and it’s going great guns under the leadership of President Minnis.  Thank you so much for the invitation, as well as the kind words.

Whenever I speak to young audiences, especially in a college setting, I’m never quite sure about the best advice that I can give them. We have some young ROTC cadets here who someday are going to be commissioned officers, and I’ve spoken to other ROTC groups, and I’ll tell you I’m going to talk about leadership today, but I’m also going to give you a piece of advice as future army officers.

You’ve all heard of the Duke of Wellington, the general who defeated Napoleon at the Battle of Waterloo.  Well, he was invited to speak to the cadets at Sandhurst, the British equivalent of our West Point.  He was asked to give some advice to these futures lieutenants in the British army. And, as the old soldier thought for a minute, this is what he came up with: “Never, ever pass up an opportunity to urinate.” You may not remember anything else that you hear here tonight, but if you remember that, you’ll be off to a good start. That was advice I wish somebody would have given to me when I was a second lieutenant;  there were many times when I wished that I had not passed up that opportunity.

Well, we’re going to talk a little about leadership here tonight, and the army leadership model. My speech writer prepared these notes for me. I want to talk mostly about servant leadership because I think it’s applicable to all walks of life, but we in the army take this idea pretty seriously. You heard that we’re updating our new leadership manual. I just got a final draft of it today, and I said I want more emphasis on servant leadership in there, and I got back a “wilco,” so I suspect that that will be in there next time I look at it.

Generals can be servants, too. You think, “well, gee, General, you’ve got an aide-de-camp, a secretary, and an executive officer, a whole staff that takes care of you, and sometimes it seems like it takes an entire village just to take care of me on a daily basis. But what general officers exercise is what we call indirect leadership. We’re commanders. We direct, we send, but we don’t directly lead. As second lieutenants and as young leaders, both on campus and in your future endeavors, you will likely be what we refer to as direct leaders.

But despite that, you still have to keep this concept in mind:  you are a servant leader. And it may seem a little bit strange to hear an army officer whose profession concerns the managed application of violence being a servant.  How does that work? Well, I’m going to talk a little bit about that, and how we reconcile that, and how we develop those kinds of officers because one of the things we as officers have to do is balance, you know, trade off between the mission and our men.

Robert E. Lee, during the Civil War, had a great quote.  He said the paradox of being a successful commander is that you have to be willing to sacrifice the thing you love.  And all of us, the reason that we stay in the army so long, is that we love soldiers. We love the army. But we have to be willing to sacrifice those soldiers in order to accomplish the mission. And that is the paradox of military leadership. You’ve heard George Patton’s saying,  probably without realizing it was his, about tough love, that “an ounce of sweat will save a gallon of blood.” Well, that’s a form of servant leadership.

That’s challenging our soldiers to be their best, so that when they face the challenges of actual combat, they’re ready for them. And, hopefully, they come out of that test with their lives intact.

Like Vince Lombardi said, “leaders aren’t born, they’re made. You develop the leaders around you so you can go to bed earlier every night.”  I found that worked for me,too. I think that’s why they tended to be effective. The other thing is, I’ve commanded at multiple levels, but it was at a brigade commander that I really had the privilege of commanding large numbers of soldier and Marines and Navy Seals in combat and watching the  sacrifice of those young people. It was at that point that it struck me that they deserve a servant leader.

This can’t be about me; this has to be about them and their sacrifice. It’s the only way I can sleep at night; knowing that I serve them, they don’t serve me.  In the army, we have a tradition that the highest ranking officer stands last in the chow line.

We don’t eat first. In the Navy, of course I hate the Navy, but in the Navy, the officers eat in their ward room. They have their own special cooks, and they eat better than everybody else on the ship. The captain eats first. He sits down first, he takes the first forkful, and then everybody else can dig in.  In the army, the last guy to eat is the commander. And if there’s no food left, tough. You better have some Slim Jims or something in your rucksack to tide you over.

But that’s how we do it in the army. That’s to reinforce the notion of servant leadership.