The National Catholic Register and 9/11 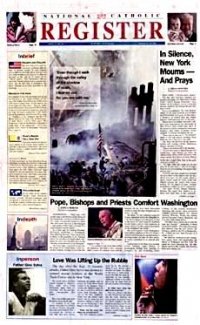 A coincidence put the National Catholic Register in an unexpectedly strong position to cover Sept. 11 10 years ago. What emerged from that coverage was a new approach to Catholic journalism.

I was the newspaper’s executive editor at the time. Two staff members left the paper to move to New York in 2001. One moved to Washington, D.C. That meant that, on the morning of Sept. 11, 2001:

The experience helped the Register find its place: Many Catholic journalists spent their time writing about the Catholic world — and how the world was changing the Church. We were reporting about culture, politics and society — and how the Church was transforming the world.

That meant that what we were doing as Catholic journalists wasn’t “inside Vatican baseball” or happy puff pieces for religious folks. It meant we were telling the true story of our times in all of its messiness and complexity: The story of God’s grace transforming our times. And we were among the only ones getting that story told.

I have been at a Benedictine College board of directors retreat the last two days. The theme that emerged was that in order to be one of America’s great Catholic colleges we had to become one of America’s great colleges first. That was the lesson we learned at the Register. Journalists who want to tell God’s story first have to be good journalists.

Which brings me to one last Register 9/11 scoop. Wayne Laugesen talked to Ed Koch in the aftermath of the terrorist attacks. What he said drives home the lesson that Catholic identity doesn’t mean retreating into a sectarian place and being timid with the world, it means being fully engaged in the world.

Koch explained that, after watching the Twin Towers fall, he immediately went to St. Patrick’s cathedral to pray. Why St. Patrick’s?

“Unlike a lot of other religions, Catholicism is not a salad bar,” Koch told the Register. “It’s very clear what Catholicism means and what it is about. You either are, or you are not, a practicing Catholic. Those who are not Catholic see this, and they admire it. That’s one reason people turn to the Catholic Church at a time like this.”

“In New York, we have always had pre-eminent occupiers in the office of cardinal,” Koch said. “Catholic leaders receive respect because they speak out, and they speak the truth, and this is highly regarded by the public. The Catholic Church also does more social service than any other organization, so in times of crisis, people are accustomed to the Church being there for them. When I had an AIDS crisis in New York, there was nobody I could turn to other than Cardinal O’Connor, Mother Teresa and the Catholic Church.”