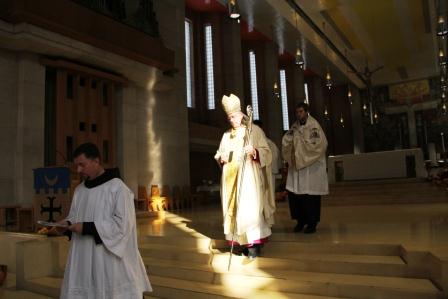 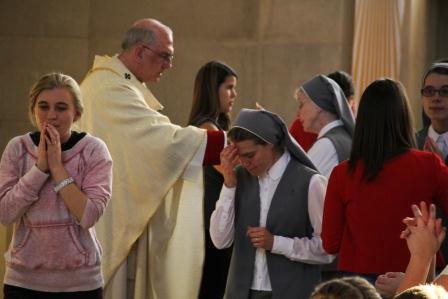 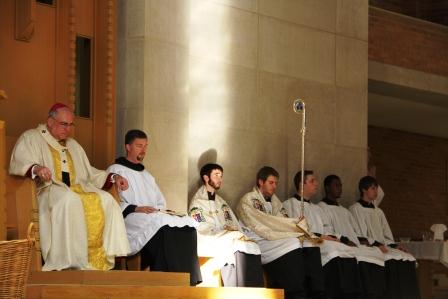 Classes are cancelled for the All-School Mass on All Saints Day, a Holy Day of Obligation.

The Archbishop and altar servers pray after communion. 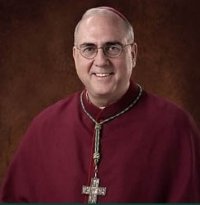 Festival of the Saints

Today, we celebrate the Festival of the Saints. It is a day that should fill us with great hope and joy because it reminds us that we are part of a great communion, a great band of brothers and sisters, who completed the same pilgrimage that we are currently traveling. They have made it to the New Jerusalem that heavenly city where there are no more tears or suffering, crying out or pain, where there is no more death but only life forever with our God.

Context of our Celebration

We celebrate this annual Festival in the context of participating in what Pope Benedict has designated as a Year of Faith, just after the conclusion of the Synod of Bishops devoted to the New Evangelization, as the Eastern half of our nation attempts to recover from a horrendous storm of mammoth proportions, and as our nation prepares for a presidential election in just a few days.

The Synod of Bishops reflected in part on how to present or represent the truth and beauty of the Gospel to cultures, like our own American society, that are becoming increasingly secularized. We see this reflected in the election process. I was saddened that the mere mention of God in the Platform of one of our major political parties was controversial.

We see this secularization manifested in the current Administration’s attack on religious freedom and conscience rights, an attack particularly, if not exclusively, aimed at Catholics. It reveals how advanced the secularization of our culture, when our federal government attempts to coerce religious institutions as well as individual believers to violate their conscience or suffer draconian penalties.

We see secularization in a society that has permitted and grown comfortable with the legalized killing of 55 million of our own children by abortion. We recognize the depth of this secularization in a culture where human life is no longer considered an inalienable right, but dependent on a mother’s choice whether her unborn child will live or die. We see it in the national debate over something so fundamental to the health of a society and the family as the very definition of marriage, which an increasingly shrill minority no longer consider as an institution established by God and inscribed into our human biology, but something that individuals or courts or legislatures or presidents are free to change to suit their desires.

What can save our culture and society from following, not the path to that heavenly city — the New Jerusalem, but the treacherous road to moral decay and decadence that has been the undoing of so many previous civilizations?

Perhaps, we can find a metaphor in the tremendous hurricane that has wreaked so much havoc on much of the Eastern half of the United States. What appeared as one enormous storm was in reality the conflagration of several storms joining forces and colliding to create a colossal weather event.

In many ways, the cultural crisis is a conflagration of many societal storms coming together. We have the moral crisis created by the sexual revolution that began more than fifty years ago supplanting traditional morality with its emphasis on fidelity, commitment and virtue and in its stead proposing a new hierarchy of values with the personal pursuit of pleasure and self-fulfillment becoming held up as the loftiest human aspirations.

There is also the crisis of materialism valuing most what is immediate and gratifies instantly. Our culture more and more is embracing an ideology that believes in only what can be seen and touched, while affording little importance to what requires discipline, what is long-term and enduring, what cannot be seen or touched but which elevates the human heart and inspires the human spirit.

Some have rightly identified the current crisis to be primarily a crisis of Faith. Secularism insists that God is irrelevant and sacrifices the transcendent on the altar of the material. Secular culture has no room for the sacred, but rather gives its allegiance to what is mundane. Having displaced God, secularism makes men lords of the universe. In such a secular culture, the Darwinian model becomes normative — only the fittest survive, but only for a time. This crisis of Faith inevitably leads to a crisis of hope. Despair is the natural consequence of a philosophy that believes that death is absolute and has the final word.

Some have suggested that the crisis of Faith is a result of a crisis of saints. That is to say that Faith has been weakened because there are not enough believers living their Catholic Faith with passion and zeal. The antidote to this perfect storm, resulting from moral chaos, an introspective materialistic philosophy, a loss of Faith, a loss of a sense of God, is the witness of the saints. What can most readily rescue a world caught in the whirlpool of despair is the joyful example of those who have experienced the depth of God’s love revealed in His Son, Jesus Christ and who radiate the joy and the hope of His Gospel

Cardinal Marc Ouelette, now the Prefect of the Congregation of Bishops but formerly the Cardinal Archbishop of Quebec City, Canada, some years ago offered a series of spiritual reflections to the Bishops of the United States during one of our Assemblies.

The current state of French speaking Canada is a sober foreshadowing of where our nation is heading. French speaking Canada, until just a few decades ago enjoyed a vibrant Catholic culture. If you visit Montreal or Quebec City, you see physical evidence of the former vitality of the Church in the numerous magnificent Catholic Churches and Shrines which are now largely empty except for tourists.

Cardinal Ouelette told the American bishops that in one of his first homilies, after being appointed Archbishop, he challenged his people by proposing: 1) what the Church most needed was not more programs or ministries — though there were indeed many great pastoral needs, 2) what was needed most was not more lay ministers — although he would welcome a more active and engaged laity, 3) what was needed most was not more consecrated religious sisters and brothers — though he dearly desired a renewal of religious life, 4) what was most needed was not more seminarians and priests — though there was no question of a great need for more good, holy, zealous priests. Cardinal Ouelette stated that what the Church most needed was more sinners, more penitents — more individuals who knew they needed God’s mercy, that they needed a Savior and a Redeeemer.

The Saints, whose festival we celebrate today, were recovering sinners. The saints are individuals who experienced the depth of God’s love for them revealed in His Son, Jesus Christ. The saints discovered the beautiful and life-changing truth that God did not love them in their perfection — in other words because they deserved to be loved — but loves them in their weakness.

It was out of this experience of God’s unconditional and gratuitous love that they experienced a joy creating within them a passion to take the love that they had received and to share that love with others. It is the hope and joy of the Gospel embodied in ordinary human beings — earthen vessels — that is the most compelling witness to unbelievers to the truth of God and His love revealed in Jesus Christ. It was the joy of experiencing the merciful love of God that drove St. Augustine, St. Marianne Cope, St. Francis of Assisi, St. Kateri Tekawitha, St. Thomas More and so many of the hidden saints whose Feast we celebrate today to proclaim the Gospel — not so much by words but by the quality of their lives.

Joy — the Heart of the Christian Experience

Pope Benedict XVI in a March 15th message to the World’s Youth said: “Joy is at the heart of Christian experience.” Pope Benedict counseled the young people: “In a world of sorrow and anxiety, joy is an important witness to the beauty and reliability of the Christian Faith.”        The Holy Father stated: “The Church’s vocation is to bring joy to the world, a joy that is authentic and enduring, the joy proclaimed by angels to shepherds on the night Jesus was born.” The joy of the Gospel is the joy of a God who loves us so much that He chose to draw close to us by becoming one of us and thus sharing completely in our humanity.

Pope Benedict asserted: “Our hearts are made for joy.” He described the yearning in every human heart for a joy that is “Far more than immediate and fleeting feelings of satisfaction, our hearts seek a perfect, full and lasting joy capable of giving flavor to our existence.”

The Holy Father, in essence, was asking young people: How does one find a joy that endures despite all of the struggles and difficulties and even sufferings of life in this fractured world? The Pope did not just raise the question, but proposed this answer: “The discovery and preservation of spiritual joy is the fruit of an encounter with the Lord. Jesus asks us to follow him and to stake our whole life on him. Dear young people, do not be afraid to risk your lives by making space for Jesus Christ and his Gospel. This is the way to find inner peace and true happiness.”

What the World Needs Now

Like the saints whose festival we celebrate today, we are called to infect the world with the joy of the Gospel. It is the joyful witness of those who have experienced the happiness of knowing God’s love — not as a theory or a theological concept — but as a result of a personal encounter with the Lord Jesus that is irresistible to a world longing for authentic and enduring joy. It is the witness of this true joy that has the power to transform secular cultures into vibrant Christian societies

This Year of Faith offers us a new opportunity to open our hearts even wider to Christ, inviting Him to reign as Lord of our lives and King of our hearts. Let us ask the Lord to give us a new outpouring of the Holy Spirit so that we may know more completely the depth of His love for us and we may witness more effectively the fruit of His love — the complete joy and abundant life — that only Jesus can provide.