A Must-Read on Religious Freedom 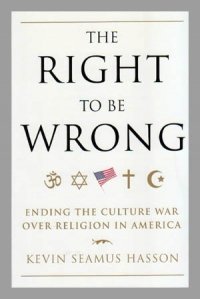 He left a partner-track position at a big time Washington, D.C., law firm to work out of a closet-sized office and defend, often pro bono, those whose religious freedom was threatened.  Kevin Seamus Hasson is a warrior for religious freedom.

Such was the 1994 birth of The Becket Fund for Religious Liberty, the law firm responsible for the fact that your City Hall can have a crèche scene at Christmas and a Menorah at Chanukah, because it respects the cultural traditions of its citizens, not because it is preaching from the courthouse steps.  That’s what Hasson’s organization argued before the Supreme Court, and the Court agreed.

Now, Hasson’s religious-liberty book, The Right to be Wrong is available in paperback, with a new final chapter and an afterword. Originally published in 2005, this book’s time is now.  Knowing the right answers to religious liberty questions is more important than ever.

Pick it up before Thanksgiving, when the school play reinforces the most enduring of our cultural myths:  “The Pilgrims who came here were looking for religious freedom, they found it, and we have all lived happily ever after.” As Hasson makes abundantly clear in his very readable style, “They weren’t. They didn’t. We haven’t.”

As inviting as the Pilgrims may have been to the natives when they shared the first Thanksgiving, they were not as inviting to those who did not share their recipe for Christianity.

The initial chapters set up the conflict between two groups: those for whom religious liberty means freedom for them and for their own religion (whom Hasson calls “Pilgrims”), and those for whom religion freedom means freedom from religion in general (whom Hasson, thanks to a hilarious — and true — story calls “Park Rangers.”)  We see how the Pilgrims persecuted those who disagreed with them, and the arguments of those who thought they shouldn’t. Those arguments percolated in our history up to the time of the American Revolution.

You probably memorized the First Amendment in high school, but the history Hasson shares of how it was written, and how it was a compromise that James Madison regretted, is fascinating.

Our Founding Fathers lose some of the sheen off their statues in Hasson’s telling — but they gain it back in flesh-and-blood humanity.  We see how Thomas Jefferson’s actions fall short of his principles, and how principles clearly seen with the mind often get sacrificed for political compromise.

The Becket Fund’s real life cases become excellent matter for reflection as well, from the rights of a young boy to read a Beginner’s Bible during a free reading period at school, to a Jewish community fighting to have state-funded special education services at a public, but 100% culturally Jewish school.  As happens with principles, trying to apply them forces us to struggle to understand and define their true nature.

The book ends with an effort to do just that. Just why should we respect each other’s religious freedom? If it’s because God said so, then, whose God?  Hasson explains, with great clarity, that the reason must be a truth about us and who we are, and not a truth about something beyond us.

The right to seek out an answers to life’s ultimate questions without coercion and to build lives together according to our own answers, even when we fallible humans may mess it up is a right that comes from human nature, and no government may ever take away what it never granted in the first place. That’s the “Right to Be Wrong” of the title.

With religious expression and Catholic identity under attack as never before, this is a must read, and Hasson is a superb guide.  The book deserves even higher praise because, at 150 pages, the author managed to keep it short and sweet.