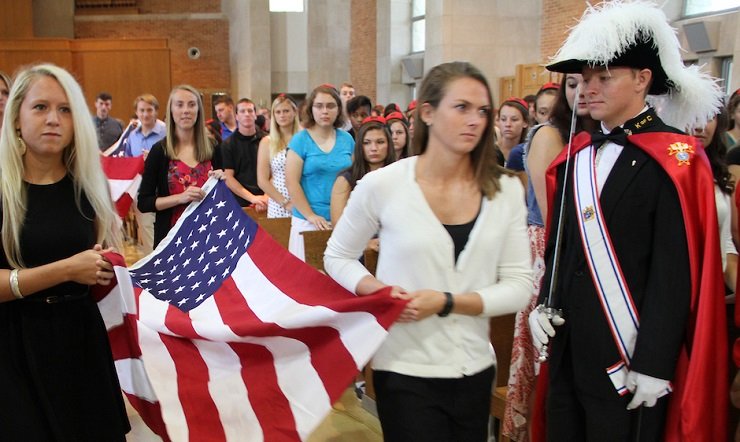 The promise of the Declaration of Independence has never quite been fulfilled. But it can be, if religious people — and especially Catholics — do their job.

In its earliest years, America celebrated the right to liberty every Fourth of July even though slavery made those celebrations a lie. But then Christian abolitionists and the deeply religious Abraham Lincoln ended slavery by calling the country back to its founding principles.

After that, we celebrated the right to the pursuit of happiness even while we denied women the right to vote and refused to give blacks equal dignity with whites. But Christian suffragettes like Susan B. Anthony and a civil-rights movement led by the Rev. Martin Luther King Jr. changed that, again by appealing to our founding principles.

Today we celebrate the right to life on the Fourth of July despite being a nation in which abortion is the most common surgery performed on mothers under age 40. And today, as always, it is religious people who are insisting America follow its founding vision.

Religion is crucial to America’s future for three reasons.

Religion is crucial because America’s founding principles are religious principles. Our Founding Fathers declared that we are “endowed by Our Creator” with certain rights. Those rights rested on the foundation of the “laws of nature and of nature’s God.”

Religion is crucial because America is a system of self-government. People who live by a high standard of conduct can be trusted to govern themselves. People who don’t, can’t. If moral commitment doesn’t control the people, government must.

And third, religion is the key to America’s future because there really is a God who really is our creator. He really is the basis of the authority of government, the animator of our freedom and the source of our morality. He really does bless those who recognize him. And those who fall out of grace with him always do so to their ruin.

In his 1996 trip to Baltimore, Pope John Paul II pointed out that “the democratic system itself” is “shaken in its foundations” when it is twisted against human rights.

But America, he said, “possesses a safeguard, a great bulwark, against this happening. I speak of your founding documents: the Declaration of Independence, the Constitution, the Bill of Rights. These documents are grounded in and embody unchanging principles of the natural law whose permanent truth and validity can be known by reason, for it is the law written by God in human hearts.”

If religion is the key to America, then the biggest political crisis in our country right now is its crisis of faith.

“‘In a world without truth, freedom loses its foundation, and a democracy without values can lose its very soul,’” said Pope Benedict XVI at the White House, quoting Pope John Paul II. He added, “Those prophetic words in some sense echo the conviction of President Washington, expressed in his Farewell Address, that religion and morality represent ‘indispensable supports’ of political prosperity.”

He said that losing the battle for religious identity in public life wouldn’t just be a loss for religious people – the loss would mortally wound democracy itself.

“Democracy can only flourish, as your founding fathers realized, when political leaders and those whom they represent are guided by truth and bring the wisdom born of firm moral principle to decisions affecting the life and future of the nation,” he said.

We would argue that the task of renewing the moral foundations of Democracy falls to Catholics most of all.

After all, Catholic theology uniquely understands the interrelationship between natural law and divine revelation. Just as Thomas Aquinas was the great defender of both theology and common sense, Catholics today uniquely understand aspects of natural law the world has forgotten: Our teachings on abortion, marriage and even contraception are defenses of what man can know without revelation.

Second, Catholics are most responsible for the future of America because of sheer numbers. Below-replacement level birthrates mean the old Protestant America is driving itself off a demographic cliff. Immigration from Mexico, Central and South America mean a new and more Catholic America is rising.

And last, Catholics are most responsible for the future of America because we are the Church founded by Christ on the rock of Peter, which he promised would prevail against the gates of hell. And the Pope himself is raising the warning. The Holy Father told U.S. bishops recently: “It is imperative that the entire Catholic community in the United States comes to realize the grave threats to the Church’s public moral witness.”

Throughout the Fortnight for Religious Freedom, the Gregorian Institute has tried to offer practical suggestions for how each of us can respond to his suggestions.

We offered ways to sharpen that witness spiritually: By inviting others to Sunday Mass, confession, prayer and service.

We offered ways to take a direct involvement in the political questions of our day: By encouraging political vocations, voting, and action for the right to life.

And we hope we have made the case that the Gregorian Institute itself is helping answer the Holy Father’s call for “an engaged, articulate and well-formed Catholic laity [to participate] in public debate about the issues which are determining the future of American society.”

Can the Church succeed? The Pope thinks so.  So do we.

He told us at Nationals Stadium in 2008 that what is needed above all is a renewal of the “apostolic zeal” that generations of Americans have specialized in. “We can and must believe, with the late Pope John Paul II, that God is preparing a new springtime for Christianity,” he said.

Image: Blessing of the American flag at the convocation  at Benedictine College in ATchison, Kansas.