Are The Hobbit and Les Mis Catholic? 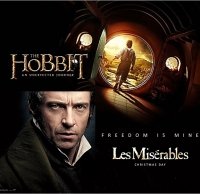 Can we claim the two biggest Christmas movies of 2012 as our own?

In my Thanksgiving post, I said with some bravado that Catholics could be thankful for our cultural accomplishments in 2012:

“Can we ‘win the culture’?  The big 2012 Christmas movies are Catholic classics:  Eucharist-loving Tolkien’s The Hobbit, and that Divine Mercy parable Les Miserables.”

But are those really Catholic stories? And does that make them “Catholic” movies?

My shorthand about Tolkien was correct: He was a devout Catholic, having followed his mother into the Church when he was 8. She died when he was 12, deeply impressing him with the sacrifices she had made to convert.

Later in life, in a letter to his son, he wrote words I imprinted on cards for my own children:

“Out of the darkness of my life, so much frustrated, I put before you the one great thing to love on earth: the Blessed Sacrament … There you will find romance, glory, honor, fidelity, and the true way of all your loves on earth, and more than that.” — J.R.R. Tolkien

That said, Tolkien had a completely opposite approach to his art from his friend C.S. Lewis. Whereas Lewis intentionally crafted parables and allegories to communicate the faith, Tolkien seems to intentionally avoid being overtly Catholic in The Hobbit and The Lord of the Rings.

Then there’s Victor Hugo, author of the 1862 novel Les Miserables. As Addison H. Hart pointed out in Touchstone, he is by no means a man of faith — “there is reason even to doubt that he was baptized.” Hugo was a kind of pantheist with an interest in the occult and séances who lived a vain life filled with sexual conquests.

But anyone who has seen the musical version of Les Miserables knows of its deeply Catholic character, from the merciful bishop to Jean Valjean’s deathbed. The novel has even more loving Catholic touches —such as the convent sisters who shelter the father and raise his daughter to be a fine young woman.

I am preparing (already!) for my Spring semester class here at Benedictine College: Christianity and Mass Media. In that class, we examine how the Catholic Church dominated the “mass media” of the past: Painting, sculpture and architecture. The Church, we learn, has always been the expert at telling the masses who God is, what he wants for us and how his saints reached glory through sacrifice.

Then we look at the 20th century and ask: “What the heck happened?” How did the Church’s dominance drain away? Why isn’t the Church the master of the new media of mass communication?

But one answer has also been proposed: Maybe Catholics have been involved in the arts all along. Maybe we are expecting a Catholic artist to be a daily communicant who fits filmmaking in between rosaries, but are forgetting that the great artists of the past didn’t fit that mold. Caravaggio was a great Catholic artist but not a great Catholic. The Medici family, patrons responsible for so much Renaissance artwork, were not known for their piety.

When the class reads Evangelical Christians on their role in the arts, we see them ask the question: “Does Bono count?” They want to claim the lead singer of U2, a thoughtful Christian, and you can see their point.

We might ask: “Do Martin Scorcese and Danny Boyle count?” Both flirted with becoming priests. If lapsed Catholics count, the Church has produced an impressive number of artists. Do the many raised-Catholic pop singers count?

I firmly believe that a sacramental worldview changes an artist. When a child is taught that the Truth became flesh, and that she can touch the intangible God in the host, the chalice, and the baptismal font, it gives her spiritual equipment that is a huge help to artistic creativity.

At any rate, maybe when you are dealing with a faith that is both Catholic and “catholic” (universal) it’s a bad question to start with. Anything that is beautiful, true and good counts as catholic, and Catholic, in the end.