“Bad Religion: How We Became a Nation of Heretics” by Ross Douthat:  A Gregorian Book Review 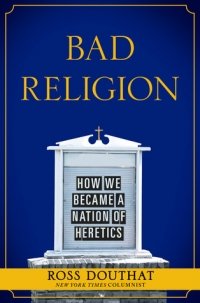 Near the end of his insightful book on America’s religious life, Ross Douthat lays out a sobering assessment, “our ostensibly Christian piety doesn’t have the consequences a casual observer might expect. We have some of the most liberal divorce laws in the Western world, and the high divorce rates to go with it. We sentimentalize the family more than certain cultures, yet we have one of the highest rates of unwed mothers…We’re more likely to fight over stem cell research than other developed countries, but our fertility clinics are among the least regulated in the world. We nod to God, and then do as we please.” (239)

Douthat, an op-ed columnist for the New York Times, and a committed Catholic, has written a book that G.K. Chesterton would love. He dismisses the idea that America’s ills can be traced to an increasing secularism or atheism. His thesis is the problems in American can be traced to an evaporation of orthodoxy within Christian denominations and Catholicism. The result is a kind of therapeutic religion where the “God Within” is celebrated over and against historic Christian orthodoxy.

Early in the book, Douthat traces how America, in its post-war years saw a great upswing in both mainline Protestant and Catholic Churches. Most of these churches had a commitment to orthodoxy which Douthat defines as, “the shared theological commitments that have defined the parameters of Christianity since the early church.” (6).

Of course, heresy has always had a presence in Christian America. Douthat endorses Alister McGrath’s definition of heresy as, “a form of Christian belief that, more by accident than design, ultimately ends up subverting, destabilizing or even destroying the core of Christian faith.” (9)

The first part of the book discusses how the decline in orthodoxy occurred over the past fifty years and how heresy began to dominate American religion. Throughout the core of the book, Douthat targets such luminaries as Joel Osteen, Oprah Winfrey, Dan Brown, Glenn Beck among others. He demonstrates how America has become more concerned with an individualistic “God Within” kind of religion. Some have labelled it “Moralistic Theraputic Deism.”

Yet in spite of such a dour outlook, Douthat is optimistic. In the final chapter, he discusses how this time we live in is a great opportunity. He rightly points out that both Protestant and Catholics have much to do to reclaim the kind of culture that produced the likes of Flannery O’Connor, C. S. Lewis, G. K. Chesterton, Walker Percy and Thomas Merton. His quote by Pope Benedict XVI gets to the root of the issue: “The only really effective apologia for Christianity comes down to two arguments, namely the saints the Church has produced and the art which has grown in her womb” (292).

Douthat’s book should be must reading for all who seek to understand the times in which we live and how we got to this point. There is much in this book to help rouse us out of our comfort zone and prepare to better confront the world we inhabit.