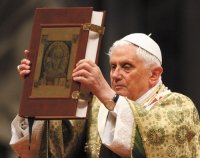 An Interview with Dr. Matthew Ramage | Matthew Ramage is assistant professor of theology at Benedictine College (Kan.).  He earned his M.A. from Franciscan University and his Ph.D. from Ave Maria University. His scholarly emphases focus on St. Thomas Aquinas and Pope Benedict XVI.  The title of his doctoral dissertation is “Towards a Theology of Scripture: Joseph Ratzinger’s ‘Method C’ Hermeneutic and Sacra Doctrina on the Afterlife in the Old Testament.”

Many perceive a new emphasis on Sacred Scripture in today’s Catholic Church.  Is this perception accurate?

Vatican II reiterated anew that the soul of theology is Sacred Scripture, but I think Catholics have only just begun to see the fruits of this teaching in the past decade or two.

At the levels of diocesan ministry, campus ministry, and college teaching, I have noticed a significant difference in how much more the Catholic laity today are aware of the Bible—and read it.  In addition, there is an ever growing plethora of accessible resources for Scripture study that were not available a few decades ago.

I have also seen an increase in the number of laity going into graduate work in theology.  There likewise seem to be more competent lay ministers and Catholic missionaries.  This opinion is more observation-based than scientific, but I think most in the field would concur.

How has Pope Benedict XVI influenced this new emphasis?

It is part of this pope’s mission to make the word of God part of every pastoral activity of the Church.  In Verbum Domini, he writes, “In this way I wish to point out certain fundamental approaches to a rediscovery of God’s word in the life of the Church as a wellspring of constant renewal.   At the same time I express my hope that the word will be ever more fully at the heart of every ecclesial activity.”   Clearly, he wants priests and those in spiritual authority to ramp up their knowledge and application of Sacred Scripture.

What unique contribution has Benedict XVI made to the study of Sacred Scripture?

Pope Benedict has developed a two-fold approach to Scripture that uniquely weds the best of ancient and modern thought:  First, it embraces the best of modern critical scholarship and really strives to grapple with the biggest problems in Scripture by using all the scholarly tools we possess to deal with such questions.  This approach helps people who have sincere questions come to Christ.  By acknowledging what is legitimate in these challenges, it enables believers to offer a thoughtful response that does not oversimplify the issues our interlocutors raise. But then Benedict is very clear:  If you don’t have a faith-based approach that goes beyond the critical and scientific, then the Bible is a dead word, not a living Word.  We need to go through the critical yet beyond it, so that every person is brought into an encounter with Christ through Scripture.  And so, for example Benedict writes:

I would like in particular to recall and recommend the ancient tradition of “Lectio Divina”: “the diligent reading of Sacred Scripture accompanied by prayer brings about that intimate dialogue in which the person reading hears God who is speaking, and in praying, responds to him with trusting openness of heart” (cf. “Dei Verbum,” n. 25). If it is effectively promoted, this practice will bring to the Church — I am convinced of it — a new spiritual springtime.

He says things like this throughout his corpus. One of the interesting things he does in Verbum Domini, which is very unusual for a Pope, is that he steps aside and basically says, “Now that we’ve talked about the theory, I’m going to teach you the steps of Lectio Divina.”  And he proceeds to lay out a practical, five step process.

With regard to Lectio Divina, there are many good books written for popular audiences, for example Praying Scripture for a Change by Tim Gray and  In Conversation with God, edited by Francis Fernandez-Carvajal, just to name a couple off the top of my head.  A lot of people are also subscribing to Magnificat.  These monthly booklets have the daily mass readings and provide little meditations that accompany them. That can be very helpful. I know in my life, when I’m faithful to that, it makes a huge difference.

What other factors have contributed to the contemporary Church’s renewed emphasis on Sacred Scripture?

I’m going to have to say that I think this is due, in part, to a positive influence of Protestants—that is, Protestant converts to the faith.  In this regard, Scott Hahn is very important, and while I don’t concur with every last point he makes, his conversion to Catholicism has exercised significant influence:  The popularization of his materials, his appearances on EWTN, his speaking all over the world—these things have spread his love for and commitment to Sacred Scripture.

He’s also been responsible for training a new generation of scholars.  These men have gone on to make a huge difference.  Dr. Ted Sri is an example.  He writes popular books.  Are they masterpieces of peer-reviewed scholarship?  No, but the thing is, he’s not trying to be a scholar first and foremost.  He’s trying to change people’s lives, and to do it in an intelligent, accessible manner.   In addition, there are the people running School of Faith in our local diocese and the people at the Augustine Institute—these are all people who were influenced by Scott Hahn.

We see the influence here at Benedictine College.  I took classes from Dr. Hahn and Dr. Sri.  [Dr. Andrew] Swafford took Sri’s classes as well.   A lot of our generation has benefited from the influence of Protestantism and its emphasis on the written Word of God.  FOCUS (Fellowship of Catholic University Students) began here on our campus, and I participated in it while studying at the University of Illinois.  Its founder, Curtis Martin, was formerly a missionary in the Protestant ministry Campus Crusade for Christ.  And FOCUS is one of the flagship ministries of the New Evangelization!   So, Protestants converting to the Catholic Church have had a very positive influence.

Tell us about Pope Benedict and the “Dark” Passages of the Bible.

In a section of Verbum Domini entitled “The Dark Passages of the Bible,” Benedict recalls the many disturbing instances of violence and immorality narrated in the Bible.  In a passage that concisely illustrates his two-pronged approach to Scripture, he insists, “It would be a mistake to neglect those passages of Scripture that strike us as problematic.  Rather, we should be aware that the correct interpretation of these passages requires a degree of expertise, acquired through a training that interprets the texts in their historical-literary context and within the Christian perspective which has as its ultimate hermeneutical key ‘the Gospel and the new commandment of Jesus Christ brought about in the paschal mystery.’ I encourage scholars and pastors to help all the faithful to approach these passages through an interpretation which enables their meaning to emerge in the light of the mystery of Christ.”

I myself have been inspired by Benedict’s work with Scripture and have made it a priority to implement his principles in my teaching and writing, as have many others.