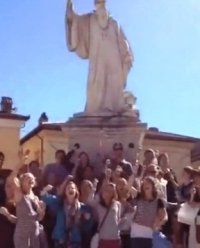 In October, Benedictine College sees many school traditions including bed races through Atchison, Kan.,  Octoberfest and the homecoming parade.

But this October saw perhaps two unusual campus traditions honoring St. Benedict: A “medal ceremony” placing a St. Benedict medal firmly into the foundation of a new soccer facility, and students gathering in the birthplace of St. Benedict in Norcia, Italy, to sing the school’s fight song.

On Oct. 1, Raven soccer men and women in their uniforms gathered in the grass adjacent to the school’s turfed soccer field for a ceremony that goes back generations. Every building on the college’s campus has a Medal of St. Benedict embedded in its foundation.

Medals are even added to the foundations of buildings that are acquired, not built by the college. In the ceremony, the medal is blessed by a monk of St. Benedict’s Abbey and laid in the foundation with prayers for those who will work on the building and those who will live or work there.

The most recent building to receive the tradition is the John Casey Soccer Press Box. This new facility will include locker rooms and an elevated viewing booth. The men’s and women’s soccer teams gathered together to pray for their new facility and dedicate their work to the school’s patron saint.

The ceremony was presided over by Father Meinrad Miller, OSB, Subprior of St. Benedict’s Abbey, Chaplain of Benedictine College, and a sought after retreat master and Communion and Liberation speaker.

The fight song is popular with students and includes the words: “Sons of grand old St. Benedict, raise your banners high!” In August, when seven Benedictine Ravens took vows as Sisters of St. Francis of the Martyr of St. George, the group broke out into the Raven Fight Song at the reception (story here).