Between Aurora and Littleton: Hope 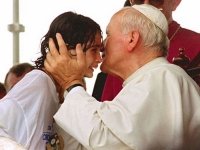 “This marvelous world — so loved by the Father that he sent his only Son for its salvation — is the theater of a never ending battle being waged for our dignity and identity as free, spiritual beings. This struggle parallels the apocalyptic combat described in the First Reading of this Mass.

“Death battles against Life: a ‘culture of death’ seeks to impose itself on our desire to live, and live to the full. There are those who reject the light of life, preferring ‘the fruitless works of darkness’. Their harvest is injustice, discrimination, exploitation, deceit, violence.

“In every age, a measure of their apparent success is the death of the Innocents. In our own century, as in no other time in history, the culture of death has assumed a social and institutional form of legality to justify the most horrible crimes against humanity: genocide, ‘final solutions,’ ‘ethnic cleansings’ and the massive taking of lives of human beings even before they are born, or before they reach the natural point of death.

“Today’s Reading from the Book of Revelation presents the Woman surrounded by hostile forces. The absolute nature of their attack is symbolized in the object of their evil intention: the Child, the symbol of new life. The ‘dragon’, the ‘ruler of this world’ and the ‘father of lies’, relentlessly tries to eradicate from human hearts the sense of gratitude and respect for the original extraordinary and fundamental gift of God: human life itself. Today that struggle has become increasingly direct.

“O woman clothed with the sun, the youth of the world greet you with so much love; they come to you with all the courage of their young hearts.