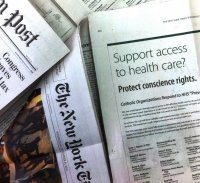 In the days before Christmas, the U.S. bishops sponsored a full page ad in both The New York Times and The Washington Post.

“The ads have made our point of view loud and clear,” Deirdre McQuade of the bishops pro-life office told me. “Is it possible that our open letter has at the very least delayed their decision or caused them to reconsider? I hope so.”

The ad objects to new health insurance rules that would require all employers in the United States to cover sterilization and contraception — even Catholic organizations. This would force Catholics to violate their consciences. The proposed HHS rules exempt religious employers from the requirement but then define “religious employers” so strictly that, as McQuade put it, “Even Jesus Christ and his disciples wouldn’t qualify.”

McQuade said that the bishops’ position is that the exemption should be much broader. Or better yet, no employer should be forced to cover sterilization and contraception: After all, most Catholics work for non-Catholic organizations. The ad, which also ran in Politico and Roll Call, features signatures by hundreds of Catholic leaders.

Pro-life stalwarts like Supreme Knight Carl Anderson, and C-Fam’s Austin Ruse are there … as well as President Stephen Minnis at my own Benedictine College. But it isn’t just “new evangelization” Catholic colleges like us that support it. Michael Galligan-Stierle, President of the Association of Catholic Colleges and Universities, representing a broad group of schools, is a signatory.

Notre Dame president Father John Jenkins was famously present when President Obama promised a real conscience clause to Catholics at Notre Dame. He has pressed his own case for conscience clause language; McQuade points out that “Father Jenkins is a signatory to this robust statement in defense of conscience rights in solidarity with the bishops.”

“It’s not like we ask people to show their Catholic membership card before we say ‘You can have medical care’ or aid,” McQuade said. “We serve those who think and pray with us and those who don’t.” Significantly, more than 20 heads of hospitals are signatories on the ad, an important showing from the Catholic medical community.

Significantly, 60 heads of hospitals are signatories on the ad, an important showing from the Catholic medical community. When combined with the heads of Catholic professional medical associations (including nursing) and other significant medical professionals, the number totals 85 health care professionals.

To learn how to do your part for conscience rights, visit www.usccb.org/conscience