Bishops Look to Campus for Faith 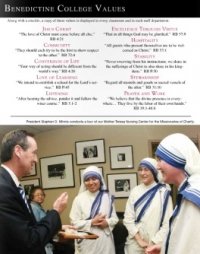 A page from Benedictine’s report.

I returned this week from a special meeting regarding Catholic higher education in Baltimore during the U.S. Conference of Catholic Bishops.

This was a follow-up to the 10-year review of Ex Corde Ecclesiae (From the Heart of the Church) that took place last year. Ex Corde Ecclesiae is Pope John Paul II’s Apostolic Constitution on Higher Education that was implemented in the United States in 2001.

The Chairman of the Committee on Catholic Education, Bishop Joseph McFadden of Harrisburg, formed a working group to examine the lessons of the more than 100 conversations bishops had with Catholic university presidents last year.

I was grateful to be at the meeting, representing Benedictine College in Atchison, Kan. I joined four others: the presidents of the Catholic University of America, Loyola University (Ill.), University of Dallas, Neumann University and St. Bonaventure University. Also on the committee were the Auxilary Bishop of Boston, the Archbishop of Portland, Ore., and the Bishops of Buffalo, Orlando, Trenton and Helena.

One of the key concerns that emerged from the group was hiring for mission – finding those faculty and key staff that are animated by Catholic identity.

As it turns out, that concern was very much on the Pope’s mind that weekend, too. Or at any rate on the mind of his representative in the United States, Papal Nuncio Archbishop Carlo Maria Viganò.

“In regard to teachers, especially university and college professors, we have witnessed that some instructors who claim the moniker ‘Catholic’ are often the sources of teachings that conflict with, rather than explain and defend, Catholic teachings in the important public policy issues of the day,” he said in an address at Notre Dame Nov. 4.

The problem is severe.

When I first became president of Benedictine College, a UCLA study was in the news. Its comprehensive survey found in 2003 that many college students drift away from the faith of their families. Before college, 52% of the students said they attended religious services frequently. By their junior year attendance had dropped to 29%.

A 2012 Georgetown University study reported that only 11% of young people today have no religious affiliation when they head to college. By the time they leave, that number has risen to 25%.

Both studies found Catholics among the most likely to lose their faith, and they found that most Catholic schools were no better than secular ones at keeping students in the fold.

That’s not likely to happen at Benedictine College. As we reported during the 10-year review, we have a number of practices that help keep young people alive in their faith. (Find our document on Ex Corde Ecclesiae and Benedictine College here — or at our website under “About.”)

I shared some of those practices with the group: We find it extremely import to hire for the mission not just in theology and philosophy, but throughout the faculty, and in Student Life and Admissions as well. We believe in visible reminders of the school’s mission: Not just crucifixes in classrooms, but also our Benedictine Values posted (with “Jesus Christ” listed first); and not just in classrooms — we also post crucifixes in the rooms in our residence halls (which, importantly, are all single-sex).

The group is developing best practices to continue the dialogue between bishops and presidents. We all agreed that the process is making important progress in Catholic identity. The group’s key determination was that mission-based hiring and formation of faculty, staff and trustees is crucial. The members recognized the need for better catechesis before and during college. The group agreed to continue to meet in the future.

Pope Benedict XVI was wise to call for the Year of Faith, so needed in our time. I give credit to the U.S. bishops for recognizing that college campuses have to be a part of that effort. Renewal of our rich Catholic faith can only be successful if it takes root in our Catholic colleges.

University classrooms, residence halls and campuses are the place where the next generation of Catholic leaders are learning what it means to be a man or woman of faith, and how that faith is relevant to the great problems we see in the world today.

I love to see this awareness take root in our students at Benedictine College. Our theme for the Year of Faith is “Stand firm in your faith, be courageous, be strong” (1Corinthians 16: 13-14). We are helping students do that in record numbers at the March for Life, on missions around the world and in the campus faith traditions that make being Catholic a natural and normal part of life.

It is exciting to be part of an effort to encourage this approach across the country.