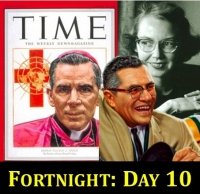 American Catholics have too often fallen into a self-defeating pattern. Call it the ghetto syndrome.

The ghetto syndrome started years before the ghetto, in 1634 when Cecil Calvert’s Catholic settlers headed to Maryland on The Ark. They were afraid of upsetting their Protestant crew, so they heard Mass in hiding on their ship. It was a bad way to start. Why should Catholics feel that the Mass is something upsetting and almost shameful? By 1692 Catholicism was illegal in Maryland.

A much bigger wave of Catholic immigrants came at the turn of the 19th to the 20th century, with Europeans fleeing in droves to the United States. They were leaving poverty behind seeking prosperity. But many of them were also leaving deeply Catholic countries behind and entering  a thoroughly Protestant one.

Catholics stayed poor at first – and stayed Catholic, too. But as we rose out of the ghetto, too many of us began behaving like those Catholics on The Ark, as if our faith was something very private that might cause offense.

Assimilation is a necessary thing for immigrants, but it is also dangerous . Our desire to be like our neighbors is powerful enough to create a united nation, E Pluribus Unum – but also powerful enough to erode religious identity.

The Old Testament is filled with cautionary tales about assimilation with pagan societies. Catholics today can relate to that.

The children of the first immigrant Catholics had a very rough time of it. They knew they had to drop their accents and change their clothes to fit in. But strong anti-Catholic currents wanted more than that.

The Know Nothings, the American Protective Association, and the Ku Klux Klan spread their mistrust of Catholics far and wide in the 19th century. As recently as the mid-20th century their sentiments were echoed by writers such as  Paul Blanshard and the organization Protestants and Other Americans United for Separation of Church and State (now shortened to “Americans United”).

The theory of inferiority they touted:

Some Catholics were cowed into submission by the onslaught; some fought back boldly.

At any rate, the faith was something too powerful to be easily dropped. That took longer. Maybe the turning point came when the new generation was finally grown up and moving into positions of leadership. Many thought it necessary to distance themselves from the “ghetto” they came from.

No longer were our universities to be places where Catholic intellectuals would mine the rich veins of magisterial teaching and apply Catholic principles to the problems of our day. Now Catholic universities were to be places that evaluated and sifted the teachings of the Church – and often found them wanting. What they would offer their students wasn’t the enduring wisdom of the Church, but whatever was currently popular in academia.

At the Gregorian Institute, we believe that dynamic is changing.

In our generation, Catholics either believe the Church, and stay in it, or disbelieve the Church, and leave it. Those who stay see its rich teaching as a beautiful answer to the world’s problems. Their experience of the world’s wisdom is more like the woman in Sunday’s Gospel. “She had suffered greatly at the hands of many doctors and had spent all that she had.  Yet she was not helped, but only grew worse.”

To encourage that changing dynamic, we launched the American Catholic Hall of Fame to remind Catholics of the thoroughly Catholic men and women who have helped make American great.

The American Catholic hall of Fame is “fresh and inspiring” according to the Knights of Columbus’ Fathers for Good website. Each installment gathers votes from Catholic leaders nationwide, such as George Weigel, Robert George, Jennifer Roback Morse and Janet Smith.

The Hall of Fame has introduced large audiences to people like:

Orestes Brownson (1803–1876), the New England intellectual who wrote: “Catholics are better fitted by their religion to comprehend the real character of the American constitution than any other class of Americans.”

New Orleans Archbishop Joseph Rummel (1876-1964), who excommunicated three public officials who opposed him when he desegregated the schools.

Charles Carroll of Carollton (1731-1832) who signed the Declaration of Independence, and who John Adams called  one of the greatest men of his time.

We will keep gathering new entrants to the Hall of Fame by category and present them to a nationwide audience via our website while we search for funding for a suitable permanent Hall of Fame on campus. (If you would like, you can help us out. Click here.)

Catholic Hall of Fame, Fortnight for Freedom, Year of Faith