Do You Believe in Miracles? Yes! 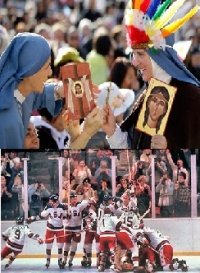 When a fellow countryman wins an Olympic medal, there is an experience of vicarious elation. One of our own has done us all proud. By association, we are all elevated to the podium.

Then we can feel justifiably proud to have two women associated with the United States receive the ultimate prize: elevation to the altars, and confirmation on earth of having achieved sainthood in heaven.

In that inspirational scene from the film Miracle, Kurt Russell portrays Herb Brooks reminding that loveable ragtag group of college boys, “You were born to be hockey players. Every-one-a-ya.” And they had a date with destiny, that mythical showdown with the Soviets in 1980. We call that victory the “miracle on ice.”

Today, in the front row of the Holy Father’s Mass in St. Peter’s, sat people who were not miracles on ice, but are so in the flesh, including a 13-year-old boy named Jake Finkbonner who was cured, inexplicably, from a flesh eating disease at age 5 through the intercession of Blessed, now Saint, Kateri Tekakwitha, the Lily of the Mohawks.

St. Kateri Tekakwitha was born in New York State in 1656 to a Mohawk father and Algonquin Christian mother and died near Montreal at age 24. She was a Christian only an Olympic span, having been baptized at age 20. Simplicity, purity, and faithfulness to daily life, especially the Mass, are what she is most remembered for.

She is one of several of today’s saints whose life as a Christian, either escaping persecution or during missionary work, took them to another country. The Holy Father’s homily told their stories.

St. Jacques Berthieu, born in 1838 in France, became a Jesuit and died a martyr’s death in Madagascar in 1896.

St. Pedro Calungsod was born around the year 1654, in the Visayas region of the Philippines. His love for Christ inspired him to train as a catechist with the Jesuit missionaries there. In 1668, along with other young catechists, he accompanied Father Diego Luís de San Vitores to the Marianas Islands in order to evangelize the Chamorro people. After a hard missionary life, persecution came and he refused to abandon Fr. Luís, who was able to give Pedro absolution in 1672 before he, too, was killed.

Pope Benedict highlighted the life of a second saint to labor in a land that is now part of the United States:

“I now turn to Marianne Cope, born in 1838 in Heppenheim, Germany. Only one year old when taken to the United States, in 1862 she entered the Third Order Regular of Saint Francis at Syracuse, New York. Later, as Superior General of her congregation, Mother Marianne willingly embraced a call to care for the lepers of Hawaii after many others had refused.

“She personally went, with six of her fellow sisters, to manage a hospital on Oahu, later founding Malulani Hospital on Maui and opening a home for girls whose parents were lepers. Five years after that she accepted the invitation to open a home for women and girls on the island of Molokai itself, bravely going there herself and effectively ending her contact with the outside world.

“There she looked after Father Damien, already famous for his heroic work among the lepers, nursed him as he died and took over his work among male lepers. At a time when little could be done for those suffering from this terrible disease, Marianne Cope showed the highest love, courage and enthusiasm. She is a shining and energetic example of the best of the tradition of Catholic nursing sisters and of the spirit of her beloved Saint Francis.”

Today’s saints are stories of the deepest expression of Catholic identity: fidelity to God’s call. Even St. Anna Schaefer, who felt called to a missionary order, but, since she was poor, worked as a maid to earn the “dowry” that was needed at the time to enter a cloister. Her legs were incurably burned in an accident and she was bed-ridden the rest of her life. “So her sick-bed became her cloister cell and her suffering a missionary service,” said his Holiness.

For each of these blessed to be canonized, a miracle has to have been proclaimed. Do miracles happen in our lifetime? Ask the Finkbonner family. I’m sure their story even beats Mike Eruzione’s third period goal against the Soviet Union.

What message does this day hold for us? What is the core of the Year of Faith? What was the impetus behind the renewal of the Second Vatican Council?

It’s the Church saying, like Herb Brooks, “You were born made to be saints. Every-one-a-ya.”