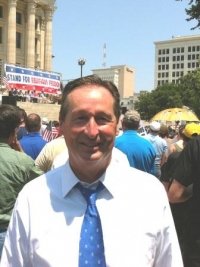 From Oct. 6 until Nov. 6, Election Day, 150 Benedictine College students are fasting from meat to pray for the right to life and religious freedom in this election year.

“There is no doubt that the problems in our country are great,” said one of the organizers, Benedictine College senior and nursing major Meghan Mueller, “And for tough cases, Jesus recommended prayer and fasting.”

Together with the Fast For Freedom, they are inviting people to pray the Divine Mercy Chaplet on Fridays at 3 pm, the traditional day and hour of Christ’s death on the cross.

It’s just one of several activities on campus focusing on the election year. Other initiatives include:

At a time when college students often have the reputation for being self-centered hedonists who are too busy living in the present to care about the future, the Fast For Freedom is noteworthy. Even more noteworthy is its emphasis not only external activism, but on internal discipline and prayer.

Benedictine College Dean of Students Dr. Joseph Wurtz commented, “This shows how our students understand how God works. He chooses the lowly to confound the lofty. I am very proud of Meghan and the others who have run with this idea and who themselves have had the self-discipline to persevere and ignite a spark.”

As Dr. Edward Mulholland pointed out in his original Gregorian post on the subject, the spark is already spreading from Kansas like a prairie wildfire.

The Fast has already spread to a number of college campuses, even internationally, including Italy, Germany and Sweden. The group does not advocate any candidate in any election, but rather is asking God for an outpouring of grace so that we, when choosing our leaders on every level, may elect the right people to put our country on a path according to God’s will.

A blog is set up on Facebook and any questions or comments can be sent to fast4freedom2012@gmail.com