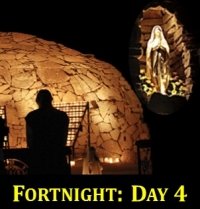 Today’s recommendation: Pray the Rosary every day and invite others to do so with you.

This comes from personal experience. We Hoopeses didn’t used to say a daily Rosary. Like many others, we started to after Sept. 11, 2001, when Pope John Paul II called for daily rosaries for peace, and kept it up until, a year later, John Paul II gave or daily Rosary a second wind.

It wasn’t until the Year of the Rosary that we started to see just how serious Pope John Paul II was about this.

“I look to all of you, brothers and sisters of every state of life — to you, Christian families, to you, the sick and elderly, and to you, young people: Confidently take up the Rosary once again,” he wrote in his Apostolic Letter. “Rediscover the Rosary in the light of Scripture, in harmony with the Liturgy, and in the context of your daily lives. May this appeal of mine not go unheard!”

How could we refuse that last line? We have said at least a decade (usually five) practically every day since.

Pope John Paul II was hailed for hastening the collapse of the Soviet Union by encouraging freedom in his native Poland.

But he had a different understanding of what happened: He thought the Rosary did it, thanks to the worldwide daily rosaries inspired by the Fatima apparitions.

“We must be wary of oversimplification,” he wrote in Crossing the Threshold of Hope, but “what are we to say of the three children from Fatima who suddenly, on the eve of the October Revolution, heard: ‘Russia will convert’ and ‘In the end my Immaculate Heart will triumph’?”

He saw no reason that the same woman who solved the Soviet crisis couldn’t solve our world’s problems today.

“Today I willingly entrust to the power of this prayer,” he proclaimed in his Year of the Rosary letter, “the cause of peace in the world and the cause of the family.”

People think of “the family that prays together stays together” as a quaint old saying. But it was a favorite saying of Pope John Paul II and Mother Teresa, and the daily practice of Pope Benedict XVI’s family, according to his brother’s biographer.

At the Register, we heard many stories of families transformed by the daily Rosary. One couple celebrated their 50th wedding anniversary with their 15 children and 66 grandchildren. Each of the kids’ families had kept their faith. One after the other, they all told us what the family secret was: the daily Rosary they said throughout their lives.

This one may seem ironic. For years, Catholics associated the Rosary with older people. But that dynamic has been reversed.

I personally experienced what many young people experience today: I learned to say the Rosary from fellow college students. Decades later, when Jim Morlino of Navis Pictures and I were working on a promotional film at Benedictine College, we were surprised when a group of students spontaneously gathered for a Rosary together in the middle of the afternoon.

Pope Benedict XVI has noticed this phenomenon as well. “The Rosary is experiencing a new Springtime,” he said. “Without a doubt, this is one of the most eloquent signs of love that the young generation nourishes for Jesus and his Mother, Mary.”

Everyone who met Pope John Paul II or Mother Teresa knew that there was something special about them. They were self-possessed but not aloof, gentle but unwavering in what counts, and looked at each person they met with deep attention and concern.

They didn’t have that character because they were naturally wonderful people: It came from prayer. And we, too, can gain a little bit of what they had, if we pray.

Pope Benedict XVI explains how praying the Rosary can transform us and our communities. “The Rosary, when it is prayed in an authentic way, not mechanical and superficial but profoundly, brings peace and reconciliation,” he said. When we pray the Rosary, “Christ is put at the center of our life, of our time, of our city, through the contemplation and meditation of his holy mysteries of joy, light, sorrow and glory.”

In his old age, when he was dying in the hospital, his adult children came to be with him and their mother. They decided that they should say a Rosary for him at the bedside. As they finished the Rosary, the man died. They looked up at the clock. It was 6:30 p.m.

There are many such stories. Mary, it seems, really does look out for us “now and at the hour of our death.”

Saying the Rosary daily deepens our Catholic identity, touches our loved ones, and moves heaven and earth for our intentions. The saints all recommend daily meditative prayer: The Rosary is exactly that. To have a real relationship with Christ, we need to know him and talk to him. The Rosary reviews his life in prayer.

There really is no good reason not to say a daily Rosary.