For Them, the March Starts Friday 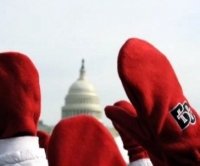 Today is the day the March for Life starts — if you’re from Kansas.

My family has participated in the March for Life in Washington, D.C., almost every year for the past 20 years. It was easy when we lived in Washington and Connecticut, but at least one of us has continued to go even after we moved. Benedictine College sends four busloads on the days-long journey each year, and my daughter will board her bus today.

The school’s epic effort was featured on EWTN in the documentary “Thine Eyes.”

Such is the youthful energy of the pro-life movement, a true movement which dwarfs the “occupy movement.” In 2009, I created a partial list of local Roe v. Wade protests across the country and found nearly 100,000 pro-lifers were attending events across the country like the Topeka event my younger children will attend.

It can seem a fruitless task, marching in the cold with signs while the media studiously looks the other way. But the March for Life is truly changing America, even if no one is noticing it, because it is changing the predominantly young people who attend it.

“The first time I attended the March for Life was the first time I realized that there really was hope,” Stephanie Trouba, the student who is this year’s March for Life Coordinator at Benedictine. “Even if we weren’t the majority in Congress, we were passionate and we were not going to give up.”

“I’ve continued my involvement in pro-life groups and my prayers for an end to abortion,” she said, “in part because of the hope I found among the hundreds of thousands of people I marched with.”

So this weekend say a prayer for those who have begun the March for Life already, in a bus. And realize that, thanks to our young people, it is only a matter of time before the United States again protects the right to life.