“Free Will” by Sam Harris: A Gregorian Book Review 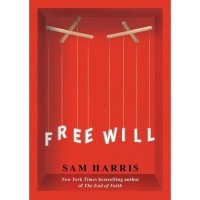 Editiorial note:  When The Gregorian Blog asked Dr. Newton to review Sam Harris’ book Free Will, he read the book and sent us the following email:  “Are you sure you want me to review this book?  It is unbelieveably bad.  I’ve read work by high school students who make better arguments.  I’m concerned that by reviewing it, I’m drawing more attention to it than it deserves.”

We will tell you what we told him:  Even though (we agree) that the book is bad, Sam Harris is part of the militant movement referred to as The New Atheism.  The New Atheists have recevied a lot of attention and attained a certain level of influence in popular society.  So, it is important to know their works and interact with them–especially since they often receive hyperbolic praise from ostensibly respectable scholars that is, as you will read in Dr. Newton’s review, questionable.

Bottom line:  stupidity has power in a fallen world. But we still have a responsiblity to respond to it and refute it.

In this short booklet (at 66 pages, it would be unjust to call it a real book), Sam Harris is under the illusion that he has demonstrated that free will does not exist.  The best part of the book is the endorsement by the noted neurologist Oliver Sacks, whom I thought had better sense than to endorse such a work.  Then again, Sack’s endorsement merely says that it is “witty” and that the author “says more in 13,000 words than most people do in 100,000.”  Of course, Sacks does not say what the “more” refers to.  Perhaps more “nonsense” is what he had in mind.  At least nonsense is how I would describe the work.

As anyone with a degree in philosophy knows, the problem of free will is a notoriously difficult topic.  It was widely debated in the ancient world, developed at the hands of Augustine, Anselm, Aquinas and Scotus, and often denied since the Reformation, by both Christians such as Calvin, and atheists, such as Hobbes.  Harris’s denial of free will is no where nearly as sophisticated as either Calvin’s or Hobbes’ denial, and his belief that he refutes the existence of free will in merely 66 pages demonstrates the utter hubris of the author.

Harris begins his book with a detailed account of a shocking crime, only to argue that the perpetrators should not be held guilty, since they had terrible childhoods and thus could not have behaved differently.  Shortly thereafter, he sets up a false dilemma: “Either our wills are determined by prior causes and we are not responsible for them, or they are the product of chance and we are not responsible for them” (5).  That there are other possibilities does not seem to occur to Harris, though I would hope that anyone taking a beginning logic course could see the fallacy here (viz., that these are not mutually exclusive possibilities).

Speaking of a beginning logic course, one of the first principles of any such course is the need to define one’s terms, something that Harris fails to do.  No where in the booklet does he define what he means by free will, other than claiming that we all have some vague belief in it.  Nor does he ever say what he means by cause, though an efficient cause seems to be all that he has in mind.  This is quite surprising since the philosophical tradition that defends free will distinguishes between final causes, which move the will toward an object, and an efficient cause, such as the way in which  the will moves other parts of a person.  Then again, there is not even any evidence that Harris has read any work that defends free will, so maybe his failure to define his terms should not be that surprising.

In the second chapter (if you can call them chapters, since several of them are less than 3 pages), Harris claims that the “case I am building against free will does not depend upon philosophical materialism (the assumption that reality is, at bottom, purely physical),” yet in the very next sentence, he contradicts himself by saying “There is no question that (most, if not all) mental events are the product of physical events” (11).  There is a sense in which Harris is correct:  the case against free will does not depend only on materialism, since reconciling free will with God’s omniscience is a much more difficult philosophical, or theological, problem––one that took the talents and wisdom of Augustine, Anselm, Aquinas and Scotus to solve.  Yet, Harris’ argument does most obviously depend on materialism, a philosophical view that no theist will grant, and one which no honest philosopher or scientist will claim has been proven.

In the third section, Harris claims that there are “three main approaches to the problem:  determinism, libertarianism, and compatabilism” (15), and then baldly asserts that the “only philosophically respectable way to endorse free will is to be a compatibilist––because we know that determinism, in every sense relevant to human behavior, is true” (16). Of course, Harris merely makes an assertion here––one that is highly debatable, if not outright false.  Shockingly, Harris seems entirely unaware of other alternatives, ones which the Christian tradition, as well as many contemporary analytic philosophers, would defend.

In a subsequent chapter, Harris is more honest when he says:  “If you pay attention to your inner life, you will see that the emergence of choices, efforts, and intentions is a fundamentally mysterious process” (37).  I assume that Harris is speaking about himself here, for toward the end of the book, he again repeats the fact that he has no idea why he prefers one thing to another, or acts one way rather than another.  Harris is right about the mysterious nature of the will.  In a famous passage from his Confessions, St. Augustine struggled to find out why he, as a young man, chose to steal the pear.  Yet Augustine never denied the existence of free will.

Toward the end of the booklet, Harris seems to reveal his motivation for writing:  “The shift in understanding [away from a belief in free will] represents progress toward a deeper, more consistent, and more compassionate view of our common humanity–and we should note that this is progress away from religious metaphysics.  Few concepts have offered greater scope for human cruelty than the idea of an immortal soul that stands independent of all material influences, ranging from genes to economic systems.  Within a religious framework, a belief in free will supports the notion of sin––which seems to justify not only harsh punishment in this life but eternal punishment in the next” (56).  The charge that religion has brought evil into the world is an old trope, one that, given the fall of mankind, has some truth in it, though not to the extent that Harris seems to think.  In reply, one only needs to remember the atrocities of the 20th century that were perpetuated by atheists or to recall the tremendous boons done in the name of religion, such as the rise of hospitals, charity organizations, the elimination of slavery, political progress, and the rise of science itself, to realize how skewed Harris’ view of history is.

The glowing endorsements inside the book cover shower Harris with questionable praise: he is the author of “best selling books”, the winner of the “2005 PEN award for Nonfiction,” has published in prestigious publications, and his works have been published in “over fifteen languages.”  Historically, those who oppose Christianity have often been extremely intelligent, well educated, and articulate.  However, given how bad this booklet is, if this is the best that the modern world has to offer against Christianity, then Christians have nothing to worry about.