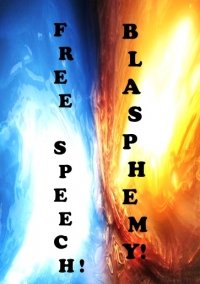 The anniversary of 9/11 was met with violence and the tragic murder of a U.S. ambassador. The stated reason for the attacks was a protest against a short film (which would have remained relatively obscure were it not for the free publicity the protesters gave it) which was critical of Mohammed.

The Obama administration did not initially call it a terrorist attack (for the contemporary phenomenon of redefining reality versus debating a point of view, see my prior post.) Somewhat to his credit, the president has defended the freedom of speech of the filmmaker (though Nakoula Basseley Nakoula is now in federal jail without bond). The Muslim protesters are calling for his death, according to the blasphemy laws of their own countries.

A controversial art exhibit in our own country (Andres Serrano’s photograph of a crucifix in urine) has some calling for blasphemy laws here as well. So what about freedom of speech?

When speaking about freedom of speech, it is important to note from the get-go that it is not an absolute right. There have always been legitimate restrictions on free speech. One cannot lie under oath, one cannot defame another’s good name without being guilty of perjury or slander (such used to be the case, anyway.) It is not a justified use of free speech to shout “fire!” in a crowded theatre either. So there are limits set by law.

There are other limits set by manners, decorum and decency. One should normally not comment on someone’s recent weight-gain, or remark that someone is dressed hideously. Only doctors get a pass on the former, and Lady Gaga has labored to made the latter a compliment. Nonetheless, to lose these customs has led to a coarsening of our social fabric.

In the Islamic world, there is no real distinction between church and state as we know it, because there is no distinction between the sacred and temporal spheres, Thus, the purpose of all law is not to ensure the well-being of citizens, but to ensure compliance with the divine law of the Qur’an. Islam means “submission” after all. Any freedom has that purpose: You are free to submit. It is a concept of the divine as absolute will. What Allah says doesn’t have to make sense, and you are not to question the sense of it, just to submit to what is ordered.

Pope Benedict XVI pointed out some flaws with this viewpoint, and caused some protests of his own after his address at the University of Regensburg in 2006.

He mentioned, among other things, that religious compliance cannot be forced by violence. One cannot do violence to enforce “submission,” even for religious reasons. The implication is that such obedience would not be truly free, and hence not true obedience. It would not be a sincere offering of self. Shotgun conversions are invalid for the same reasons shotgun weddings are: Consent under duress is not full consent. The Church herself has repented of actions by Catholics which followed that same illegitimate method.

So what is the basis for freedom of speech? What is its purpose? We all have an obligation to strive for truth in our lives. We are not free not to do that. But that search for truth, and how we communicate that to others, is an individual journey. We are free to express that as we see fit. We are not to be constrained by external law to submit to a truth we don’t see clearly. The purpose of the government’s protection of free speech is to enable all, freely, to discover truth and build a society based on what we can agree upon, a good that we freely embrace and freely share, a common good.

But we should feel constrained to respect the rights and opinions of others. If we have a neighbor that mows the lawn in a Ben Roethlisberger jersey and flies off the handle every time the Steelers lose, we can freely place a “Steelers stink” sign in our yard, but — while an act of free speech — this would still is disrespectful and un-neighborly, and may even be seen as a provocation. If our neighbor has a history of violence, deliberately provoking him is not a smart thing. Do we really need to insult his favorite team to express the best of ourselves? Does that self-expression contribute to building a peaceful neighborhood?

There are plenty of things which we are free to do, but we should not do them nonetheless, out of respect for others. I once heard a beautiful definition of freedom: To be free means that in any time or circumstance, I can do what I should do. Sure, we are able to say a whole lot of things (nobody has a gun to our head), but should we say them?

Does this mean we should not share our faith or challenge those who are thin-skinned? Quite the contrary. It means we should do so courageously and wisely. As Pope Benedict said at Regensberg: “The courage to engage the whole breadth of reason, and not the denial of its grandeur – this is the programme with which a theology grounded in Biblical faith enters into the debates of our time. ”

Freedom is not the ability to submit, it is the ability to choose the good with our whole hearts and minds and lives. And the good that we choose, ideally, should not be good for us alone, but a good in which others can freely share. When we communicate that truth to others, and offer it so they can freely share it, we form a more perfect union, establish justice and ensure domestic tranquility.