Frodo Is In Africa 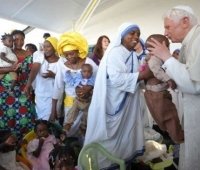 How can we possibly find hope in the state of Christianity today? We won’t by looking at the West. But we will if we look at the big picture. There we see a scene like the the one at the end of the Lord of the Rings.

Our heroes are at the gates of Mordor, swords drawn, ready to die fighting, as the orcs surround them. There is no question how that lopsided battle is going to turn out … until little Frodo and his faithful friend Sam change everything.

It’s a great ending because it’s so true. God loves the unexpected win by the little guy: If not the hobbit on the mountaintop, then the carpenter on the cross, the martyrs in the Coliseum, or the shepherd on the Irish hills, pulling the rug out from under the empire.

So what about us? Where’s our Frodo?

Now watch me get crazier.

We live in a place where women are expected to continually assault their bodies with hormones to make them always sexually available to men, even though they sacrifice their own libidos in the process. Women have always worked outside the home – for instance, the mothers of the last three popes and of St. Therese of Lisieux. But we live in a place that tries to convince women that a life spent serving corporate interests is fulfilling and a life raising children is second-rate.

Now, don’t get me wrong. There are plenty of virtues in our culture: The genuineness our culture aims for is a breath of fresh air compared to the facades favored in former times. It is beautiful that racism is ugly to us, that food and medicine are plentiful and that working conditions have improved (in the West, at any rate). I like our music, our movies have reached a high level of art; there are great things in our culture.

However, on key fundamental moral issues from the right to life to religious freedom and the definition of marriage, the secular forces do seem to be moving in for the kill.

But just wait. Frodo is in Africa. And South America. And China. And even India. And Christianity is about to win again.

We are so focused on the foe in front of us and the drubbing Christians are getting in America and Europe that we forget that we are just one small corner of the world. Leaders, for now, but that leadership won’t last long without its moral foundations.

The research of Phillip Jenkins in The Next Christendom and John Mickelthwait and Adrian Wooldridge in God Is Back is spelling out what too many of us ignore.

Christianity isn’t on the wane. It’s on the rise. Secular weirdness that embraces abortion and contraceptive mandates and new definitions for marriage isn’t the inevitable mighty future, it’s the last playing out of archaic 19th-century individualist notions in one small corner of the world. Secularism dominates in the West because we are culturally decadent, but it is destined to implode into its own philosophical emptiness like the shell of that cicada that was recently so explosively noisy.

But what about the surge in atheism led by Dawkins and Hitchens and echoed in the secular media (which nearly always quotes atheists in stories about Christian beliefs but hardly ever vice versa)?

What “surge in atheism”? There is no such thing, outside Starbucks booths and university hallways.  By one estimate cited in God Is Back, in 1900, 67% of the world population was composed of members of the four major religions. In 2005 it was 73% of the world. By 2050 it could be 80% of the world. Atheism is at its weakest point in memory, and it is waning.

And Christianity isn’t just surging by some vague demographic necessity; it is surging like a springtime. Our new Christians are filled with unpredictable energy and unabashed enthusiasm, unencumbered by the baggage we carry in the West.

Our blinders to the rest of the world could cause us to despair. We shouldn’t.

Christians aren’t a remnant. We’re the next big thing. You just can’t see that very well from New York or Washington. But you can from Nairobi and Sao Paolo.

Our job is to do what the dwarves, elves and men do in Lord of the Rings: continue to defend what is good and right — even if it means getting creamed in the short term.

But we aren’t fighting orcs. We have the answer to the problems our sick, dying society suffers from: Abortion is wounding parents and killing children. By taking away religious freedom, our nation is nixing the very thing that made America great. Marriage is the vital institution that ennobles men and women and commits one generation to the next. We owe it to our own countrymen to show them why these things are worth preserving.

We can promote these truths confidently, not as a dying Western church but as a growing world flock.

Our brothers and sisters to the south have met Jesus Christ. They don’t scoff at him, belittle him and reject him. They love him like we do. They suffer with him, they like what he likes, reject what he rejects, and are ready to rise with him.

And they are watching us, and praying for us.

Let’s not disappoint them. Let’s stay in the fight.