G.K. Chesterton and the Art of Living Well in a Time of Crisis 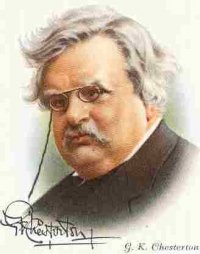 G. K. Chesterton, the great Catholic writer, apologist, and portly “apostle of common sense,” said that in the spirit of medieval chivalry, he once gave up his seat to two women. While we may chuckle at his quip, we should also see it as instructive. This great, big man’s personality and disposition can teach us something. Living out the Christian life is never an easy task, no matter what size we are. But in these times of economic, moral, and spiritual crisis, Chesterton can help us along our way. Here are four lessons from his character and life that may help us live ours better:

First, Chesterton was committed to laughter—even in the face of opposition. He was well known to laugh at barbs tossed at him. Alan Jacobs, in his biography of C. S. Lewis, describes an incident where one of Chesterton’s opponents, one Cosmo Hamilton, wrote about his experience with him: “to hear Chesterton’s howl of joy…to see him double himself up in an agony of laughter at my personal insults, to watch the effect of his sportsmanship on a shocked audience who were won to mirth by his intense and pea-hen-like quarks of joy was a sight and a sound for the gods…It was monstrous, gigantic, amazing, deadly, delicious. Nothing like it has ever been done before or will ever be seen, heard and felt like it again” (Jacobs 121). How much influence could we have on relationships if we responded with laughter instead of anger? In today’s moral and spiritual climate, Catholics experience a lot of opposition—but our skin is far too thin and we too easily take offense. Humor is a powerful tool that can disarm our foes and win sympathy to our cause.

Second, Chesterton was self-deprecating. Even when we stand on the right side of a cause, the temptation can be to see ourselves as a little too important. Chesterton had the wonderful ability to laugh at himself, thus keeping both of his feet, and his ego, in check. The story is told that once, when he was having trouble trying to get into a cab (horse drawn in those days), the cabbie suggested he try turning sideways to get in. Chesterton, not missing a beat, replied: “I no longer have a sideways!” On another occasion, during World War I, while walking down a London street, he was accosted by a woman demanding to know why he was not out at “The Front.” Chesterton replied calmly that if she would merely come around in front of him, she would see that he was! Clearly, Chesterton did not take himself too seriously—and neither should we, no matter what the cause.

Third, Chesterton’s Christian life was charged with a sense of wonder. He possessed what Ian Ker calls “a magical view of the world and his Catholic faith.” William Oddie observes that when Chesterton discovered George MacDonald (much like C. S. Lewis would later) as a child his whole world changed. Chesterton wrote in The Victorian Age in Literature that MacDonald “could write fairy-tales that made all experience into a fairy-tale. He could give the real sense that every one had the end of an elfin thread that must at last lead them to paradise.”(37) Oddie observes, “The essential breakthrough in perception is to see that there is a direct line of communication between the imprisoned world of everyday sense and another imaginative dimension in which anything might happen, a dimension that has the power to transform the element in which we ourselves must continue to move.” For Chesterton MacDonald’s fairy stories “differ from others…in achieving this particular purpose of making the ordinary staircases and doors and windows into magical things.”(Oddie 37). Do we see the Christian life like Chesterton did? And if not, why not? We Catholics possess the sacraments and the great traditions,which are designed to enchant us as much as to nourish us. Chesterton overcame the gloominess of a time of crisis because he was captivated by the truth, goodness, and beauty of the Catholic faith. We can do the same!

Finally, Chesterton provides a model for presenting Christ to a skeptical world. Clearly, he was a genius at communicating the Gospel in a way that not only confronted the reader, but also enlightened him. For Chesterton, the Gospel “is nothing less than the loud assertion that this mysterious maker of the world has visited this world in person.” Moreover, in The Everlasting Man, he writes this about the ministry of Christ: “but there is another quality running through all his teaching which seems to me neglected in most modern talk about them as teachings; and that is the persistent suggestion that he has not really come to teach…the life of Jesus went as swift and straight as a thunderbolt…it is a journey with a goal and an object. The primary thing was he was going to die.” Chesterton wanted his contemporaries to understand that God in Christ was not impersonal, but completely and perfectly human—and that, in his incarnation, he identified with the human race in both suffering and death. Far from the common caricature of Jesus as nothing more than a tranquil teacher of parables, Chesterton’s presentation of the suffering and dying God-man is one that caught people’s attention. Maybe we, too, can captivate our culture with Christ by presenting him as he really is!

We can learn a lot about living the Christian life in times of crisis from this giant of a man who once gave up his seat to two women. If we laugh often, take ourselves lightly, approach the world and our faith with wonder and awe, and present Jesus to others as the God who identifies with us in suffering and death, we can live well in this time of crisis. And we can be effective witnesses to the Gospel.