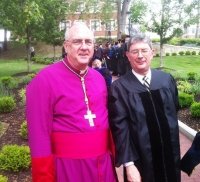 Talk about launching students into the world.

At Benedictine College’s commencement ceremony today — held at the Raven gymnasium, our only space large enough to hold it — students were given an inspiring challenge first by Archbishop Joseph Naumann and then George Weigel.

“Today, I believe, Benedictine College is really on the forefront of the new evangelization and so, I don’t think there is any greater honor … than to say, I am a Raven.”

Then George Weigel was hooded with his honorary doctorate. He said “My fellow-members of the Class of 2012 of Benedictine College, one of the great challenges of your generation will be to rise to the defense of religious freedom in full.”

“Your defense of religious freedom is going to require the skills of reasoning and argument that you acquired here at Benedictine College,”  he said. Then he added something that is not said often enough to young Catholics:  “It is going to require that some of you accept the risk and challenge of public service in elective office.”

He succinctly described the federal assault on religious freedom as “an assault that imagines ‘religious freedom’ to be a kind of ‘privacy right’ to certain leisure time activities.”

The project of defending religious freedom “will be the work of a lifetime,” and “will not be without cost,” he said. What cost? Maybe martyrdom:

“Some of you may suffer various forms of martyrdom in taking up this cause: the martyrdom of ridicule, of being labeled ‘intolerant’ and ‘bigoted;’ the martyrdom of career paths blocked and promotions denied because of your adherence to the moral truth of things; the martyrdom of political defeat, or a judicial case well-argued but lost.”

He added: “Thomas More, patron saint of Catholics in public life, was never more a free man than when he bent his neck to the executioner’s axe in free adherence to the truth.”

Both speakers received standing ovations. The Benedictine College class he was addressing includes a dozen who plan to become sisters or seminarians, 20 who plan to become full-time missionaries, the college’s first nurses, who will bring their Catholic identity to health care, along with engineers, theology majors, accountants, entrepreneurs, teachers, musicians, artists and more.

Pray for them and all Catholic university graduates. They are dynamic, imaginative and full of faith. They will have to be.