Getting More Out of Mass 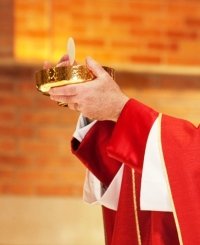 The Mass is the “source and summit of Christian holiness” in more ways than one. It’s the source of inexhaustible spiritual riches … but it’s a summit that can seem unreachable. Here are some ways to make the climb a little easier.

Mass and the Passion

ACTS – to get the most out of Mass, we should imitate and invoke those who are at the foot of the cross: We should Adore Jesus as John did. We should have contrition like Mary Magdalen, give thanks like his mother did, and offer supplication like the good thief. Together, these make the acronym ACTS.

Notice that as Mass begins, the liturgy touches each of these bases. But notice how difficult it is for us to do the same.

We tend to bracket off things that are always the same in our lives – like our morning drive to work or school. We can easily let Mass pass by the same way, hardly noticing it. But personal relationships – with friends, family or God – won’t work unless we engage our brains.

What to do: It’s best to fight routine with good habits. One habit: Always pick someone for whom you’re offering your Mass. Another: Always look at the statue of Mary at a particular point in Mass and remember you are there in her company. Make certain brief, silent prayers a habit.

Human nature looks for easy pleasures and warm feelings. People tune in to pop music more than classical. But Mass is powerful because its prayers are plain and austere, sober and eloquent. No matter how hard we try to dress up the liturgy, it will always bore us if we’re looking for superficial enjoyment.

What to do:  If our mind is wandering or our attention waning, the liturgy itself is our first lifeline. Grab onto it by concentrating again on what the priest is saying. Or look at the crucifix, particularly Christ’s wounds, or the tabernacle, to remember the high purpose that brought us here.

3. Focusing on the ministers

A very strong current in our nature will note and size up the human beings at Mass, not the spiritual realities. We’ll notice the lector, not God’s word. We’ll think about the priest, not who he represents.

What to do: Push through the crowd to Christ like the woman with the hemorrhage did, like Mary did in the Passion movie.

“I have eagerly desired to share this Passover with you.”—Jesus at the Last Supper, Luke 22

Entering the pew and taking our seat is the first step of Mass. We gather first of all with Christ, the “principal agent of our Eucharistic assembly” (Catechism, No. 1348). We gather with the Church — “not only the members still here on earth, but also those already in the glory of heaven” (Catechism, No. 1370).

Blessed John Paul II said that Mary should be our “support and guide” in approaching the Mass. “Mary is present, with the Church and as the Mother of the Church, at each of our celebrations of the Eucharist,” he wrote.

What to do: Say a brief silent prayer to Our Lady to make the most of this Mass. Call to mind specific people uniting with us at Mass — on earth and in heaven.

Liturgy of the Word

“Beginning with Moses and all the prophets, he interpreted to them what referred to him in all the Scriptures.” —Jesus and the two disciples, Luke 24

The readings at Mass are God’s ordinary way of speaking to us. Many saints’ lives of holiness began when a word at Mass powerfully connected with them. Often, we’ll say, “That reading was for me!”

But the Scriptures are not all easy to understand. They are ancient texts and are sometimes written in unfamiliar genres.  Here are some aids to getting the most out of them.

Old Testament — Crack the code. These readings are usually chosen because they refer to Christ. Find the clues that refer to God’s plans for mankind – how he uses prophets to prepare for the Messiah.

Psalm — Pray it, don’t say it. Look at the tabernacle or the crucifix as you say the refrain, and address the words directly to Christ instead of merely repeating them.

Epistle —Find the soundbite. St. Paul’s language can be dense. Try listening to each line in order to choose just one to remember.

Gospel — Action words. If the story isn’t enough, focus on the verbs. “He was traveling” — Jesus went to great lengths to reach us. “Ten lepers met him” — They took the initiative to get to him. Shouldn’t we? “When he saw them, he said” — Jesus notices us, and reaches out.

What to do: Following along with a missal or Magnificat (Magnificat.net) makes it easier to focus.

Liturgy of the Eucharist

“Into your hands I commit my Spirit.” —Christ on the Cross, Luke 23

Pope Benedict XVI called the Eucharist “a gift of love that is truly worth more than all the rest of life.” The right attitude toward the Eucharistic prayer, during which the host is consecrated, is “amazement.”

Prayer.  The liturgy here reminds us of what Pope John Paul II called the “cosmic” dimension of Mass. We don’t just pray, we join our voices to the angels and saints who are praying. The “Holy, Holy, Holy” echoes the anticipation that heaven itself feels as the Eucharistic Prayer approaches.

Passion. This isn’t the Stations of the Cross or the Sorrowful Mysteries of the Rosary – reminders of the Passion. This is the real thing. “The victim is one and the same, the same now offers through the ministry of priests, who then offered himself on the cross; only the manner of offering is different,” says the Catechism. “In this divine sacrifice which is celebrated in the Mass the same Christ who offered himself once in a bloody manner on the altar of the cross is contained and is offered in an unbloody manner” (No. 1367).

Presence. The Bible shows how powerfully being in God’s presence should affect us. Moses was in awe, afraid to be on holy ground. He hid in the cleft of a rock, because no man could look at God and live. St. Peter was so overwhelmed by Christ’s presence he said, “Go away from me, for I am a sinful man.” The centurion said, “I am not worthy to have you under my roof.” Simeon said he could die in peace after seeing the infant Jesus once.

What to do: Silently pray “My Lord and my God,” as the host is elevated and “My Jesus, mercy,” as the cup is elevated.

“Let anyone who thirsts come to me and drink.” — Christ in the Temple, John 7

“The principal fruit of holy Communion is an intimate union with Christ Jesus,” says the Catechism, No. 1391. Pope John Paul II compared this union to marital union in that receiving Communion should strengthen our bond and re-align our shared purpose with Christ.

Here is what communion does, according to the Catechism:

What to do: In the Communion line, silently pray: “Mary, lead me to the altar of love.” And: “Lord Jesus, truly present in the sacrament, I bow before you, I adore you.”

“They set out that instant and returned to Jerusalem to tell the others.” —The disciples after breaking bread with Christ, Luke 24

“Mass does not end at the church door,” said Blessed John Paul II. The very name “Mass” comes from the dismissal. The Mass may be a source and summit of Christian life, but the principal apostolate of lay people happens outside of Mass.

But we receive the real presence of Jesus Christ, in the form of a host, and then are sent out. The message is just as clear. Without us, the Eucharistic Jesus would remain in the tabernacle. But with us, he can enter the world and work, through us.