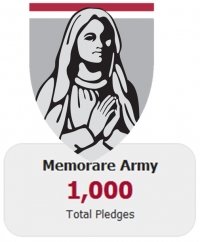 Benedictine College has gathered a Memorare Army to pray 1 million Memorare prayers for religious freedom and stronger Catholic identity in the United States.

We began our prayer campaign in the afternoon on Tuesday, Feb. 7 on our Gregorian Institute website.

Our goal was a thousand pledges, and we met that goal in less than a week.

Now, let’s see how far we can leave that goal in the dust.

In the words of Archbishop Joseph Naumann, who asked that we start this Memorare Army: “Without God, we can do nothing; with God, nothing is impossible.”

I am convinced that to pray for this intention is vitally necessary and will reap benefits we hardly dare imagine.

The Memorare prayer was a favorite of Mother Teresa, who formed the first Memorare Army. The version we are using is taken from the official list of prayers in the Compendium of the Catechism of the Catholic Church.

The Memorare has been a big deal here at Benedictine College ever since our president, Stephen D. Minnis,  learned it from one of our Benedictine sisters when he was in high school. We put together Memorare Armies whenever something needs to be done on campus. In fact, we credit a Marian apparition as the reason we exist at all.

Let’s put this matter of forced contraception coverage in the hands of Our Lady of the Immaculate Conception. Let’s put religious freedom in the hands of the woman whose free “Yes” is the cause of our hope.

Click “Memorare Army” in the tab above to join the Army.