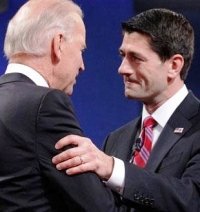 When Vice President Biden responded to journalist, moderator, Martha Raddatz questions about how his Catholic faith informed his life in politics and government, his rambling response drew upon the common “enlightened” dodge that numerous flip flopping Catholic senators, governors and mayors have adopted in the wake of feminist pressures for abortion “rights.”

Biden responded that he accepted the Church’s teaching (de fide) that life begins at conception, as his “personal view,” but that he was unwilling to impose his morality on others.

Edmund Burke, the British political philosopher whose views on the duties of elected representatives enlightened the founding fathers at Philadelphia in 1787 no doubt rolled over in his grave. In his 1774 “Speech to the Electors of Bristol,” Burke reminds the citizenry of the role of a true representative. Burke contended that a representative owes them his mature judgment, his enlightened conscience which he does not derive from their pleasure and not even from the law and the constitution.

“He betrays, instead of serving you,” Burke contended, if he sacrifices these to your opinion. Are you listening, Mr. Biden?

Like JFK, the first Catholic President, and the likes of former Governor Mario Cuomo, Biden exempts himself from letting his conscience be his guide. Cuomo articulated this position in more detail in his infamous speech at Notre Dame in 1984. This view would leave religion out of the national debate relegating it in the sanctuaries of Catholic Churches. Religious freedom comes down to freedom to “worship behind closed doors.”

From this line of argument, slipshod as it is, one is left with the question, “What other teaching of the Church would he not be willing to impose?” How about Thou shalt not Kill, steal, or bear false witness?

Congressman Ryan, Biden’s opponent in the Center College VP debate, made the natural law point that science and faith need not conflict and a simple look at a sonogram showed him and his wife that their seven week old unborn child whom they nicknamed “Bean” was clearly a member of their family and the human family long before birth.

Biden, in one of his many interruptions, implied that Ryan was being a hypocrite for pushing church teaching on abortion while not following church “social justice” teachings. Once again, we endure the remarkably spurious correlation often trotted out by some Catholics between justice and government programs to aid the poor, needy and otherwise marginalized. Of course we all know that greedy business people lie, cheat and steal, but somehow, when one becomes an elected office holder or a career public servant, all vestiges of original sin are wiped away.

Conveniently, the principle of subsidiarity is entirely overlooked in the rush to bless the view that justice cannot be accomplished with the actions of private charitable organizations but only by government action.

Possibly they miss the intent of scripturally based Church teachings about “rendering unto Caesar.” To my knowledge, scripture does not say that Jesus suggested that everything be rendered unto Caesar so that He may then decide what the poor, elderly, and the infirm are entitled to receive.

The Obama-Sebelius HHS mandates could eventually drive the Church out of the social services business altogether.Clearly there are those in government and out who would prefer that “intolerant” Catholic teaching on abortion and marriage would not be permitted to infect the non-Catholic needy who would receive future social services under Church auspices.

In a January 2008 First Things article, titled “Law and Moral Purpose,” Robert P. George, Professor of Jurisprudence and Director of the James Madison program on American Ideals and Institutions at Princeton University reminds us that, “The concentration of economic power in the hands of government is something every true friend of civil liberties should, by now, have learned to fear.

“Unfortunately, entirely too many Catholics in and out of office want to embrace that concentration of power in government hands. They seem to overlook the possibility that the relationship between socialprograms and elected office holdersworking with the bureaucracy beholden to them could sometimesbe motivated by less than altruistic goals.”