How Can We Help the Homily? 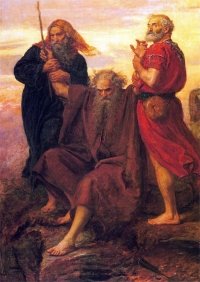 This is part two of a series on the importance of the homily.  If you haven’t read part one, you can do so here.

The image of Aaron and Hur supporting Moses provides a vivid analogy for how we might support our priest in his calling to serve and protect the people of God through preaching.  Just as Aaron and Hur lifted up Moses’ arms, we can provide support for our priest as he attempts to deliver dynamic, Scripturally-sound, Christ-exalting homilies.

For the children of Israel, Moses was the leader.  He was the man of God who had authority and who was called by God to lead his people out of slavery to Egypt.   He was called to serve and protect the people of God.

In Exodus 17, Israel was attacked by the Amalekites and Moses directed Joshua, his second in command, to gather an army of men who would fight against Amalek.  During the battle, Moses ascended to the top of a hill to observe the battle and pray for the Israelite army.  So long as Moses hands were lifted up in prayer, the battle went well.  But when he lowered his hands, the enemy prevailed.

After awhile, Moses grew weary; his arms grew tired and he was unable to lift them up himself.  He needed someone to assist him.  So, Aaron and Hur, who had joined him on the hill, helped him lift up his arms.  They helped the servant of God ensure victory for the people of God.

How can we support the priest as he lifts up his congregation? Here are four specific ways:

1. Pray for homiletics.  Pray for the revitalization of Catholic preaching in general and the homilies of the local parish priest in particular.  Pray that God raises up a new generation of priests who are not only faithful celebrants of Mass and confessors, but dynamic communicators who catechize, evangelize, and mobilize the faithful with creative and compelling homilies.  Pray, too, that God raises up deacons and faithful laymen like Frank Sheed to carry on powerful preaching apostolates outside the context of the liturgy. Pray through relevant passages of Scripture, like Romans 10:14-15 and 2 Timothy 4:1-8. Ask for the intercession of St. John Chrysostom, the patron saint of preachers or St. Dominic, the founder of the Order of Preachers.

2. Pray for the congregation. Any one who has ever done public speaking or public performance can tell you how important a good audience is. Receptive listeners who are eager to learn and attentive draw good homilies out of speakers. Unreceptive, inattentive audiences make it tough to speak. The New Testament agrees. This Sunday’s first reading is from the Acts of the Apostles 10:44. It says: “While Peter was still speaking these things, the Holy Spirit fell upon all who were listening to the word.”  The Holy Spirit didn’t make Peter wonderful;  he made his audience receptive. Pray that this might be so in your own congregation.

3. Praise every good thing. “Strengthen the things that remain,” is great consel that Jesus gives to Church in Sardis (Revelation 3:2). Priests are blessed with many critics of what they do — or, too often, of every move they make. Don’t join those critics. Instead, catch your priest doing good. Did he say something imaginative? Compliment him for that specific thing. Did he say something bold? Congratulate him for his courage.  If you have read a good book, pass it on to him, and promise not to quiz him on it later: It is his to do as he likes.

4. Put yourself at his disposal—to help him free up time in his schedule to devote to the study of Sacred Scripture and the preparation of his homilies. Our priests have an overwhelming number of responsibilities, and many of those responsibilities—such as celebrating Mass and hearing confessions—only they can perform.  But there are other responsibilities—many of them clerical, administrative, or even of the “gopher” type—that we can take off his shoulders. If you have a parish council that divvies up duties, join it, and do your part. If you don’t, talk to others in your parish and determine what responsibilities can be performed by volunteers.  Form a “Committee to Liberate Our Priest from Less Important Responsibilities.”  As the Twelve Apostles stated in Acts 6:2: “it would not be right for us to neglect the ministry of the Word of God in order to wait on tables.” Demonstrate by your actions that you really do want him to have more time to devote to Scripture study and the homily.  The additional time spent in lectio divina will be good for his soul; its effect on his ministry and preaching will be good for yours.

We may not be Moses, but we can be Aaron and Hur. We may never deliver the homilies, but we can help our priests to deliver them better. Let’s support the servants of Jesus Christ, lifting up their arms to help them ensure victory for the people of God.