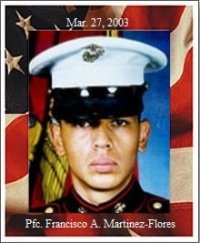 It is a great example of Catholic identity in public life. Those who read this essay in the National Catholic Register shortly after the beginning of the Iraq war in 2003 found it hard to forget. Now, nine years later after the U.S. timetable in Iraq has run its course, it is good to remember the Americans who sacrificed their lives there.

The recitation of the rosary for Pfc. Francisco Martinez Flores, 21, one of the first Marines killed in Iraq, took place in Duarte, Calif., the town he called home from the time he arrived from Jalisco, Mexico, at age 3.

Except for the large number of teen-agers and young adults, the crowd of more than 400 people who packed into the Carmelite Chapel was probably no different from mourners in other towns across the nation who came to honor fallen Marines.

But what made the service unique was the message read by the young man’s fiancée, Marisela Campos, also 21. Both the content and the delivery were unforgettable.

In a clear, controlled voice that never once faltered, she read, first in Spanish and then in English, her prepared reflections. “Francisco does not want us to cry,” she said, and she quoted from the first letter he wrote after leaving home: “I hated seeing the tears in your eyes when I left … I never in my life want to see you cry, only for joy.”

“I would like to share with you something very special and beautiful that we offered to God,” she said. “Back in November we went to church and knelt at the altar before Jesus crucified and gave our promise of chastity to God that we would save ourselves until marriage. We did this out of respect for ourselves and to please God because we believe in the holy sacrament of marriage.

“Francisco was opened to God’s call. We went to Sunday Mass together, to frequent confession and had a life of prayer. God walked hand in hand with the both of us. God was the strength in our relationship. Without his being present in our lives there would not have been that authentic love.”

She told of their long friendship, going back to when they met in the seventh grade, how they read the Bible together, how they planned their wedding “and discuss[ed] our future children’s names.” In his last letter home Francisco discovered the name Seth meant giving. He thought that would be a good name for one of their boys because it summed up their relationship.

She quoted from another of his letters: “One thing that I can promise you is that I will keep my soul clean. I will not take an innocent life away.”

Before he left for Iraq, he kneeled before the crucifix and promised to save himself for marriage.

“He had a respect for life,” she added. “In the last letter I received from him, he had written on the outside of the envelope, ‘Look up at the sky and smile when you get this.’ I received the letter three days after he died.”

Before the crowd that stood in wrapped silence, she concluded her remarks, her voice echoing throughout the dimly lit chapel: “Thank you, Virgin Mary, for walking hand in hand with me thought these difficult moments and thank you, God, for Francisco’s irreplaceable love and memory that will never be extinguished from my heart. I know who awaits me in heaven when my time arrives – not only Jesus, my king, but also my prince. Francisco, I love you.”