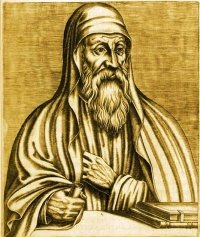 I have been asked to ponder the question of what advice might be given by the Fathers of the Church to our present challenge, i.e. to engage the culture of our age with the Gospel of Christ. The Fathers, of course, faced the very same challenge, and under similar circumstances: a culture deeply inimical to Christian values, and very disinclined to take seriously the claims being made by Christians. The earliest, post-apostolic generation of Christians took this challenge so seriously, and devoted so much energy to its demands, that they became known subsequently as the ‘apologists’, i.e. defenders of the faith. Any roster of the apologists would have to include figures such as Justin, Irenaeus, and Tertullian, but I wish to focus on one in particular, Origen of Alexandria.

Origen’s biography need not detain us here, except to say that he was a lay catechist, later ordained a priest, the son of a martyr, and without a doubt possessed the most formidable Christian intellect between Paul and Augustine. In the time of Origen a book was making a considerable ripple amongst the intelligentsia of the Roman Empire: its title was ‘Against the Christians’, and its author a notable pagan philosopher named Celsus. It was one of many such books which cropped up in the early centuries: full of mocking jabs and condescending arguments aimed at the fledgling Christian Church. Origen felt the book deserved a reply, so he himself penned one, aptly named ‘Against Celsus’, which would probably run over 600 pages if ever republished in manuscript form. Celsus’ attacks were, more often than not, the same attacks made upon the Church in all ages: Christians are ignorant and under-educated, their conversion tactics manipulative, their Scriptures foolish and self-contradictory, their beliefs opposed to the best science of the day, etc.

Origen replies to each charge in turn, and much can be learned of value from each page of the Contra Celsum. But I would like to propose three broad lessons, gleaned not from Origen’s specific arguments but rather from his general technique, which could help us refine our own.

Proclaiming Christ
First, Origen teaches us the limits of argument: the Gospel does not rest on human argumentation, nor does the belief of any Christian – it rests, rather, upon the demonstrative fact of divine revelation. In other words, conversion to Christianity does not come about through a series of inferences or syllogisms, but rather from an encounter with the person of Christ. “I venture to say that this defense which you require me to compose,” Origen writes to his patron, “will somewhat weaken that defense of Christianity which rests on facts, and that power of Jesus which is manifest to all who are not altogether devoid of perception.”

That is why the central task of the Church can never be argument, but rather proclamation, i.e. the proclamation of the fact of the resurrection, having no doubt that “the facts themselves would . . . furnish a manifest refutation” of argument against it.

Second, Origen teaches us that, despite the limits of argument, we should never fail to offer arguments when they are demanded of us. Origen himself, after all, did not fail to do so, although he insisted, only the utterly weak in faith would need such a defense. More importantly, it had to be on Origen’s mind that one of the most serious and persistent criticisms that Celsus makes of Christians is their inability to offer such arguments, or rather, their complete lack of interest in arguments.

Celsus, as reported by Origen, “asserts that certain persons who do not wish either to give or receive a reason for their belief, keep repeating, ‘Do not examine, but believe!’ and ‘Your faith will save you!’” Such persons, Celsus rightly holds, cannot be taken with any intellectual seriousness, and indeed, it seems as though the heresy of fideism – which holds that Christian faith is incompatible with reason and science – was as alive in the first century as it is in the twenty-first. Origen insists, in response, that “in the Christian system also it will be found that there is . . . much investigation into articles of belief!” Similarly, the very fact that he wrote this tract shows his belief that Christian claims were rationally defensible.

Thirdly, Origen teaches us that we should not be afraid to seek a common ground with our opponents. This common ground, in fact, is established by the former point, i.e. that Christianity is compatible with reason: thus, a common commitment to the dictates of reason could provide a common playing field. This is what Christian philosophers have traditionally called ‘natural law’: since God has endowed all men with reason capable of contemplating nature, and nature itself “manifests God’s invisible nature” (Rom. 1:20), reason is a key access point to divine wisdom.

As Origen says, “It is not therefore matter of surprise that the same God should have sown in the hearts of all men those truths which He taught by the prophets and the Savior.”  This common ground, e.g., is what allows Origen to congratulate his opponent Celsus for his prudent rejection of idol-worship, which both men find irrational.

So, in sum: Christianity does not rest on arguments but is always happy to offer them, finding human reason a key ally in its ever-present challenge to engage the culture with the Gospel of Christ.

Dr. Jamie Blosser, Assistant Professor of Theology at Benedictine, teaches courses in church history, ecclesiology and New Testament. He received his Ph.D. in Historical Theology from The Catholic University of America in Washington, DC, and wrote his dissertation on the theological anthropology of Origen of Alexandria.  Before teaching at Benedictine College he worked at the U.S. Conference of Catholic Bishops in Washington, DC.  His main interest is in the study of patristics or early church studies, in particular Origen and Augustine of Hippo.  He and his wife Danielle have five boys: Augustine, Ambrose, Cyprian, Basil and Cyril.