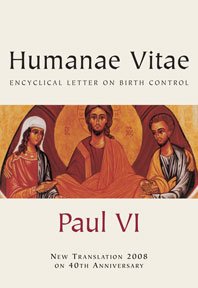 On the anniversary of Humanae Vitae, have you read Pope Paul VI’s life-changing encyclical?  Do you have trouble understanding its contents?  Here’s a clear, pithy summary of its salient points:

1.      The transmission of human life is a grave duty that has always been a source of joy for married couples acting as free and responsible collaborators of God the Creator.

2.      The Magisterium of the Church is competent to interpret the natural moral law as the expression of God’s will whose faithful fulfillment is necessary for salvation.  She cannot declare licit what is essentially opposed to the well-being of man.

3.      One cannot use partial perspectives in dealing with procreation.  Rather, one has to consider the issue in the light of an integral vision of man and his earthly and eternal vocation.

4.      The author of conjugal love is God.  Marriage is an institution created by God to realize in humanity his loving designs.  Moreover, among the baptized, it is a Sacrament.

6.       We must understand RESPONSIBLE PARENTHOOD in relation to:

7.      Each and every marital act must remain open to life.  One may never separate the two aspects of the conjugal act:

8.      To not be disposed to the transmission of life is to contradict the essential design of marriage and the nature of man and woman who are not arbiters of the sources of life.  Rather they are administrators of the design established by the Creator.

10.     A fruitful conjugal life in total does not legitimize a single conjugal act that is made willfully infertile.

11.    If there are serious motives for spacing births, derived from the conditions of the couple or from external conditions, it is permissible to take into account the natural rhythms of the procreative functions to use the infertile periods.

12.    The artificial regulation of birth:

13.    The practice of an honest regulation of birth demands that the couple acquire solid convictions of their values of life and family and a perfect self-mastery.

14.    Educators should create a favorable climate in the education of chastity: the triumph of healthy liberty over license while respecting the moral order.

16.    Married couples, scientists, doctors, priests and bishops must live, and teach people to live, this doctrine in respecting life and the moral law.

17.    The Church is called to a great work of education, progress and love.  Man cannot find the happiness that he aspires to without respecting the law of God recorded in his very nature, laws that he must observe with intelligence and love.

Courtesy of the Association of the Defense of Life, Costa Rica.  Provided at the recommendation of Father Matthew Habiger, O.S.B., a monk at St. Benedict’s Abbey (Kan.) and noted expert on Natural Family Planning.