Institute for Missionary Activity in the News 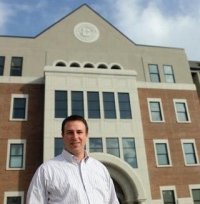 Wurtz told the paper: “I think students will benefit from the Institute for Missionary Activity because they will receive multifaceted training and intentional formation to make them desirable to a multitude of employers both domestically and internationally.” He said Trotter “has already developed relationships with a host of constituents who are eager to hire the graduates of the IMA. I believe the Catholic Church and our country will abundantly reap the benefits of this missionary generation.”

One small victory: The Institute is already causing the secular media to write about the New Evangelization.

“One of the institute’s main focuses is a concept called New Evangelization,” explained the reporter, “an expression used by Pope John Paul II to describe the Catholic Church’s approach to missionary work in modern culture.”

It also announced our big upcoming event. “The Symposium on Advancing the New Evangelization will take place March 23 and 24 and address topics such as media, literature, international mission work, social justice, post-modernism and more. One keynote speaker at the symposium — which is directed toward professors and other professionals but is open to students, as well — will be Barbara Nicolosi, founder and chair emeritus of Act One Inc. of Hollywood. The other will be Archbishop Joseph F. Naumann of Kansas City.”

For more information on the symposium, or the Institute for Missionary Activity contact David Trotter: