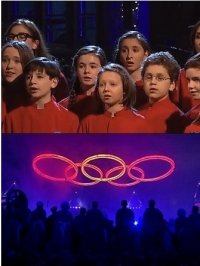 In a beautiful and moving tribute to the victims of the Sandy Hook Elementary School massacre, Saturday Night Live opened its Dec. 15 show with a children’s choir singing Silent Night.

It reminded me of the Olympic Opening Ceremony’s tribute to the 52 victims of London’s “7/7” terrorist attacks — an a capella performance of the hymn Abide With Me.

When the world needs to find hope in a dark hour, we still know where to look: Jesus Christ.

There have been many dark hours in 2012, a year marked by shocking violence that reached its most shocking in Newtown, Conn.

These kind of attacks directly undermine hope, and hope is in short supply in 2012. College campuses’ student life offices were on alert this year because of a nationwide trend of student depression and suicide.

Faced with the bleakness here below human beings tend to look elsewhere, and Jesus Christ is still the best place to look.

In an increasingly secular society, why is Jesus still so popular to us when we are in trouble? One clue is given by those two hymns: Silent Night and Abide in Me.

They tell us that Christ provides people a “home.”

Secular values can try to replace a lot of things religion once provided. But modern secular societies have all been marked by a nagging sense of alienation and isolation. We feel empty and lost in the universe even when things are going well.

As Father Robert Spitzer described this sense of “not belonging”: “Many philosophers and theologians connect this feeling with a human being’s yearning to be home with the totality — not merely home with myself, my family, my friends, or even the world, but to be perfectly at home, without any hint of alienation. When the desire for perfect Home is even partially fulfilled, philosophers, theologians and mystics variously refer to it as joy—love—awe—unity—holiness—quiet.”

Violence uniquely disturbs this yearning we have for home. When something like the slaughter of kindergartners in their classrooms happens, we suddenly feel like there is no place for us, or our deep longings for belonging and safety.

We begin to feel exactly what is expressed in the hymn Abide With Me.

Abide with me; fast falls the eventide;
The darkness deepens; Lord with me abide.
When other helpers fail and comforts flee,
Help of the helpless, O abide with me

That’s like an Advent prayer — it has the desperation of the Old Testament figures who long for God to “rend the heavens and come down.”

The answer to the prayer is given by “Silent Night.”

There we finally see the place we can find the home we’re looking for— a place on earth that is also a place of divine intervention: “round yon Virgin Mother and child.”

The hymn promises precisely those things we long for: Joy, love, awe, unity, holiness and quiet.