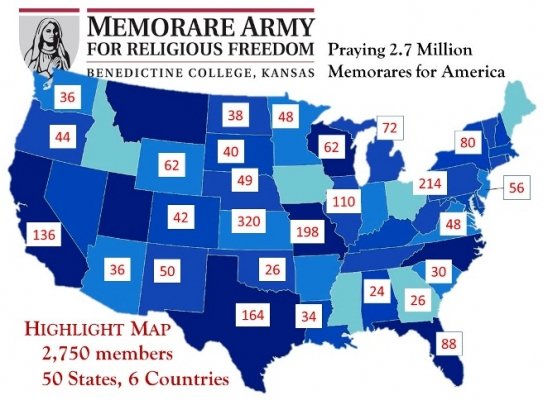 Click “Memorare Army” in the menu to join the prayer campaign. 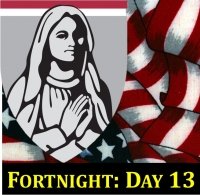 When news came that the Health and Human Services mandate was forcing all Catholic institutions to provide contraception coverage to their patients, the Gregorian Institute and Benedictine College knew just where to turn.

We turned to Our Lady.

When Benedictine College President Stephen D. Minnis started the Memorare Army for Religious Liberty, we hoped that in a few weeks we would attract enough members to say 1 million Memorares for religious freedom. We got there in a few days.  Today, the Memorare Army is a worldwide phenomenon, with “prayer warriors” in 6 countries, and all 50 states, praying 2.7 million memorares. See membership highlights in the photo above.

We turned to Our Lady because, in many ways, Benedictine College owes its very existence to the intercession of the Blessed Mother.

Our Memorare Army is a real army, though prayer is our only weapon. It reminds me of the line from Song of Songs often referred to Our Lady: “Who is this that looks forth like the dawn, fair as the moon, bright as the sun, terrible as an army with banners?”

Starting a Memorare Army for religious freedom was Archbishop Naumann’s idea, first. He was a fan of the previous Memorare Army prayer campaigns on campus, and wrote about them in his weekly column (click here for “How Prayer Stopped a Kansas Storm.”) The National Catholic Register told the story (“Never Was it Known …”) of how President Minnis’ first Memorare Army built Mary’s Grotto on campus.

The Memorare is one of the prayers for Catholics recommended in the official Compendium of the Catechism of the Catholic Church. It takes seriously that Mary, as mother of Christ, is mother of Christ’s body, the Church, too. And she doesn’t withhold her help when her children ask her for it.

Pope Benedict XVI talked about what a caring mother she is. “The intervention of the Virgin Mary in offering caring aid throughout history … does not cease to call forth, in the people of God, an unshakable confidence in her: the Memorare prayer expresses this sentiment very well. “

We face a great battle for religious freedom in America. But we are not afraid. Like Mary in The Passion of Christ, our mother is telling us: “I am here.”