Lessons to Learn From Election 2012 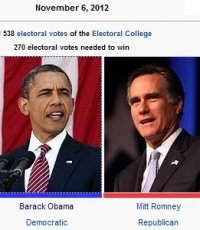 For 10 years I coordinated the vote for Missouri for the News Election Service (a consortium of ABC-CBS-NBC-AP and UPI and later CNN.) We were tasked to project the vote on Election night for the State of Missouri. Unfortunately, the crystal ball I used often needed Windex early in the evening, but became clearer as the night/morning wore on.

Missouri was considered a bellwether and had only voted for the presidential candidate who lost once from its admission into the union until 1956, and only once after that. The national networks understandably drove us crazy on election night wanting to project Missouri and see how many people from different socio-economic groups turned out.

We (four political science graduate students and I) wore a path on the floor pacing back and forth in front of the five computer feeds we had tallying the count from selected precincts, county votes, state totals, past models and other exit poll data.

After the crystal ball and computer treks, we consulted what is also most important in the “science” of prediction — we initiated the old “gut check.” We asked ourselves: Could what we are seeing in Greene county or Little Dixie or the Bootheel really be true, even if the statistics seem to say something different? Thankfully I got out of it in 1998 before the flack hit the fan in 2000 with the hanging and dimpled chads in Florida.

This year’s projections must be a nightmare. There are some really important things we should learn from Tuesday’s count (if it ends on Tuesday and doesn’t end up in court again like 2000).  First of all, we will find out if polling methods wedded to the telephone and cell phone are viable any longer. Next, we will learn if well-organized get-out-the-vote efforts trump economic bad news as the driver of elections. We will also learn if Religious Freedom issues have resonance with the voters.

In a close race in the suburbs of major metropolitan areas, church-going Catholics who listen to the National Conference of Catholic Bishops and Evangelical voters will be all important in answering these questions. As pro-life activist civil rights leader Dr. Alveda King (niece of Dr. Martin Luther King) puts it “People should vote their consciences, not just their checkbooks.”

Litigation of all kinds is likely to emanate from this election night. Legions of lawyers (attorneys if you don’t like alliteration) are lined up to challenge the opportunity of all to vote and to “protect the integrity of the count” (code words for “help our guy win.”) In addition, litigation like current cases involving business owners with conscience objections to being forced to comply with the HHS abortion and contraception mandates will likely press their cases further. Likewise, state attorneys general litigation on the part of their constituents may or may not go forward if Kathleen Sebelius is no longer HHS Secretary after the polls close tomorrow.

With all the wide divergence in the polls, we may get an insight into whose prediction model is better.

Many of the major pollsters are modeling the remarkable turnout in 2008 in which energized young voters and minority voters in the historic election of the nation’s first African American president will be repeated in 2008. That would seem to be quite a stretch. Logic would suggest that such a model might skew the two-party vote in the wrong direction and understate the impact of the independent voter who usually breaks for the challenger.

Will the Election tomorrow be an incumbent’s delight like the close 2004 election? Will it be closer to the 2000 nail bitter? Will it more closely resemble challenger Reagan’s surprise in 1980 or be the common historical incumbent’s coronation? Sadly, whoever wins, legislative gridlock in Congress is more likely than not despite any coattails the winner might extend.