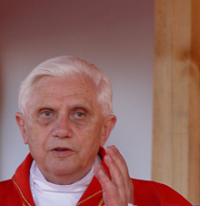 Controlled demolitions fascinate me. I think it is an amazing science to take down a building systematically, in a way that it implodes upon itself. One thing that appears to be common to all of them is this: you first sever the link between the foundation and the rest of the edifice. Seems logical enough. Anything will certainly tumble when it has nothing to stand on.

While tourists travelled to Mayan ruins awaiting the end of the world, the Vicar of Christ reported to the College of Cardinals on the end of the year. It is traditional that he give a year in review about how things have gone within the Church. His first audience with the diplomatic corps in the new year will provide his reflections on the situation of the world in which the Church lives out her mission.

This morning, his Holiness underlined one again the family as one of the main focal points.  His analysis probed the foundations of our society and found deep fissures. He showed how some positions that may look like rejections of Catholic regulations ultimately stem from a vision of man that is radically different from the truth about who we are that the Church teaches.

First, many question today whether human beings can and should make a life-long commitment.  In the Pope’s words, “[T]here is the question of the human capacity to make a commitment or to avoid commitment. Can one bind oneself for a lifetime? Does this correspond to man’s nature? Does it not contradict his freedom and the scope of his self-realization? Does man become himself by living for himself alone and only entering into relationships with others when he can break them off again at any time? Is lifelong commitment antithetical to freedom? Is commitment also worth suffering for?”

What is at stake is not merely Catholic teaching on divorce, but who we are as human beings. Are we beings who are fulfilled in isolation, and who let others into our individualistic bubbles only when we choose? Or are we beings who can only be who we are if we give of ourselves to others… and if we don’t, our nature is unfulfilled.

To opt for the self-enclosed individualist ultimately destroys a foundational pillar of our society. “When such commitment is repudiated, the key figures of human existence likewise vanish: father, mother, child – essential elements of the experience of being human are lost,” he states.

Another, even deeper, element in the Holy Father’s words addresses masculinity and femininity. Are they nature or nurture? The Pope’s follows in his reflection a study done by the Chief Rabbi of France, Gilles Bernheim.

If society has made us  male or female, we can claim the right to decide for ourselves, and redefine our own “gender.”  The fact of being male or female would not be an essential element of who we are and how we seek fulfillment. And yet, this rejects the Biblical account, “Male and female He created them.”

The Holy Father points out a subtle contradiction in our culture. “The manipulation of nature, which we deplore today where our environment is concerned, now becomes man’s fundamental choice where he himself is concerned. From now on there is only the abstract human being, who chooses for himself what his nature is to be.”

(It was the previous quote and others like it in the speech that lead to the surprising Reuters headline “Pope says saving heterosexuality like saving the rainforest.”)

Our culture has bought into the idea that religion is just optional adornment. The tree is the reality, the tinsel isn’t, so choose whatever ornaments you want. The vision of the Church, so articulately explained by his Holiness, points out the danger of such a view.  Our culture hasn’t only opted for different tinsel, but for an artificial tree.

And the Church speaks out not to defend God (He can handle himself) but to defend man. And in order to defend man, to defend the truth about human nature, she proclaims certain truths about God.

Pope Benedict concludes this point strongly: “When the freedom to be creative becomes the freedom to create oneself, then necessarily the Maker himself is denied and ultimately man too is stripped of his dignity as a creature of God, as the image of God at the core of his being. The defense of the family is about man himself. And it becomes clear that when God is denied, human dignity also disappears. Whoever defends God is defending man.”

Heaven and nature must be in harmony. But heaven sets the key. We pray for God’s will to be done on earth as it is in heaven, not the other way around.  When we make up our own key, not only to we sing out of tune, but the shock wave of such disharmony can sever our culture from its only lasting foundation.