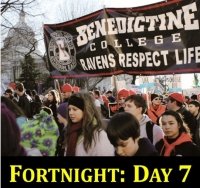 It seems almost too terrible to be true: In our culture, many infants lives are snuffed out in their mothers’ wombs.

But while human societies may find a way to sanction horrific practices for a time, when enough people insist on the truth and refuse to back down, evil inevitably fails.

So it is that Americans are souring to abortion. The May 2009 Gallup headline was “More Americans ‘Pro-Life’ Than ‘Pro-Choice’ for First Time.” The May 2012 Gallup headline was “‘Pro-Choice’ Americans at Record-Low.”  State legislatures spent 2011 enacting a slew of pro-life laws. It seems as if it is only a matter of time before Roe v. Wade is overturned. What does this pro-life shift mean for the culture at large?

Quite a bit, I think. Consider:

We all know examples in our lives (maybe the example is our own life) of what happens when someone goes from “pro-choice” to pro-life. Suddenly that person’s whole worldview changes.

Becoming pro-life undermines moral relativism. Once you realize that calling it “pro-choice” doesn’t magically make killing okay, you start asking uncomfortable questions about what other moral truths our culture might be wrong about.

Becoming pro-life teaches you faith. Once you accept the importance of babies you can’t see, you start to wonder what other important unseen things you are missing. Like God, for instance.

Becoming pro-life teaches you to hope. The pro-choice argument depends on despair: It says that it would be so terrible for a mother to bring her child into the world, she might as well kill it. Once you see through that, you start to trust God’s universe a lot more.

Becoming pro-life teaches you love. The destruction of an unborn child is a grave sin against love and repentence from abortion is a builder of enormous love (see Luke 7:36-50; “Her many sins have been forgiven; hence, she has shown great love,” says Jesus). And pro-lifers have not just opposed abortion, they have learned to love and serve unwed mothers.

The right to life is the mother of all non-negotiable issues.

Melinda Henneberger wrote a 2007 op-ed in the New York Times called “Pro-Choice Is a Bad Choice for Democrats.” In it, she described the pro-life Democrats she interviewed in her research who found it impossible to vote for abortion supporters. “Many of them, Catholic women in particular, are liberal, deep-in-their-heart Democrats who support social spending, who opposed the war from the start and who cross their arms over their chests reflexively when they say the word ‘Republican,’” she said. “Some could fairly be described as desperate to find a way home.”

Pro-choicers:be aware that those who back the right to life, no matter how much they agree with any other thing you say, will never be with you. And many pro-lifers disagree with you because they have never heard your arguments. Unfairly or not, they reflexively shrug off what “pro-aborts” say. That makes abortion support a very bad political strategy, because …

It’s inevitable: The pro-life train may be slow, but it’s just going to keep coming.

Science will keep convincing us of the humanity of the unborn … because researchers today know more about an embryo from her DNA than they knew about anyone 100 years ago.

Technology will keep converting people … because ultrasounds aren’t going away and Life-magazine style photo-shoots aren’t going away either. And even though the media still won’t show an abortion on TV or share straightforward information about it openly, the game’s up: The abortion industry can’t hide the humanity of the unborn anymore.

Women who have had abortions also won’t let the issue die  … because they are in pain and they are angry that they were lied to, and they will stand out in the cold holding their “I Regret My Abortion” signs because they know someone has to be willing to tell women the truth.

When you drill down in the poll numbers you find a significant statistic: Young people are much more pro-life than older people.

“I went to the March for Life rally Friday on the Mall expecting to write about its irrelevance,” admitted Robert McCartney in the Washington Post in 2010. “How wrong I was. The antiabortion movement feels it’s gaining strength … Roe supporters (including me) are justifiably nervous. … I was especially struck by the large number of young people among the tens of thousands at the march.”

All the energy in the debate is on the pro-life side, with innovators like Lila Rose relentlessly exposing the sexist, predatory profiteering of the abortion industry. These young abolitionists are America’s new civil rights heroes, and when the lid is finally blown off the abortion lie, future generations will learn about what they did in school.

Evil never wins. Evil is greedy and gluttonous. It always grabs more than it can handle.

It is one of evil’s greatest triumphs that, in our time, people are willing to kill their children. But it is a victory that hangs by a very tenuous thread. All it takes is for someone to say to themselves, “Really? You’re calling killing a fundamental right? Are you nuts?” and the whole house of cards comes crashing down.

And when evil loses big, good makes more gains than it ever would have on its own.