Lions and Tigers and Judges, Oh My 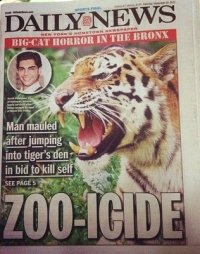 Last week a man jumped into the tiger enclosure at the Bronx Zoo, and the only tiger that happened to be in the habitat at the time mauled him. Seems natural enough. Even in New York, where stranger things have happened, it made headlines. One paper cried out “Zoo-icide!”

The next day, it made headlines again, when the man, a 25-year-old gainfully employed animal enthusiast who survived the encounter, declared that it was no suicide attempt, but his desire “to be one with the tiger.” A few broken limbs and several puncture wounds are a testament to his mission accomplished.

I recall another tiger-obsessed man that had 15 minutes of fame a few years ago. He had tattooed tiger stripes all over his body and had plastic surgery to have a snout complete with bristly whiskers. At the time he was saving up for surgery to have his hip joints reversed so he could walk on all fours.

There are two possible reactions to such stories. The common sense reaction would be to make small circles close to one’s ear, indicating cuckoosville. The other, the reaction of our current intelligentsia, would be to salute the flag. After all, isn’t it great to live in a country where we are free, free to achieve our dreams, free to spend our money on whatever we want, even to become trans-specied?

Is freedom, as understood these days, to be celebrated in its limitless possibilities, or to be redirected toward an ordered dynamism inherent on our human — specific to humans, not just mammals — nature?

The “limitless possibilities” freedom is the current law of our land. In the Supreme Court decision Planned Parenthood versus Casey, (a case which struck down a Pennsylvania law because it restricted the Roe v. Wade right to abortion) Justice Kennedy and the concurring justices wrote “At the heart of liberty is the right to define one’s own concept of existence, of meaning, of the universe, and of the mystery of human life.”

We are free, therefore, to redefine existence as we see fit. I hope the judges read last week’s story with a smile. Their tireless dedication to liberty has struck down barricades once again; this time, the barrier separating New Yorkers from ferocious Bengal tigers.

The spokesperson for the Bronx Zoo rightly praised his staff for rescuing the man. He also underlined a very important fact, “The tiger did nothing wrong.” Of course, he was only doing what tigers do, following his tiger-nature, we could say. It is less of a leap to draw out the conclusion: maybe the animal enthusiast was not following his human nature. Maybe the choice, free of all external constraint (other than misdemeanor trespassing, with which he has been charged), to jump from a monorail into a tiger enclosure is not a good use of one’s freedom.

Many would see this as obvious. Our Declaration of Independence called it “self-evident.” But what if one’s pursuit of happiness (as one chooses to understand it) threatens one’s life? That used to be called posing a danger to oneself and others. Now, it seems, it is an exercise of freedom.

Until freedom is again understood as ordered to our human nature, and we rediscover that we are not free to redefine that at our whim, we as a culture will not even understand what our founding documents tell us. If this understanding of freedom does not direct our jurisprudence, our society is prey to whatever meaning of freedom an arbitrary majority invents. We are thrown to the wolves, or tigers … or judges.