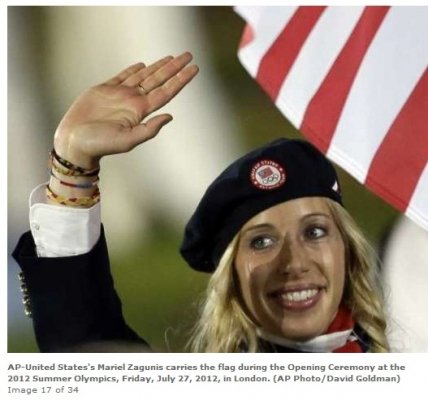 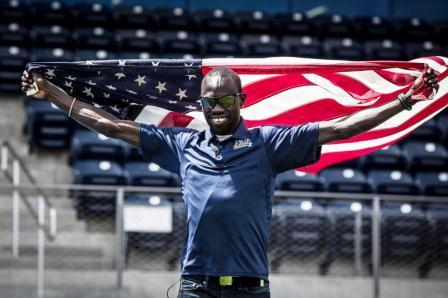 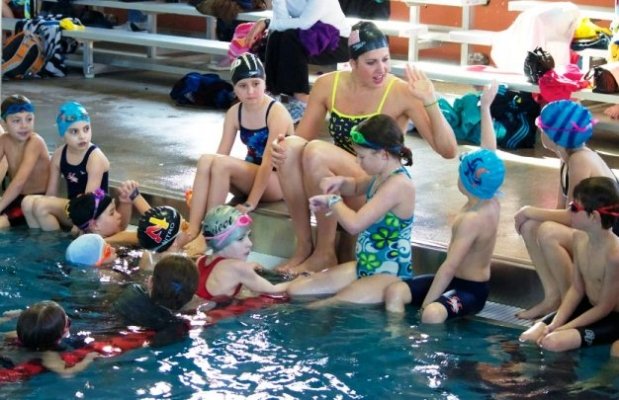 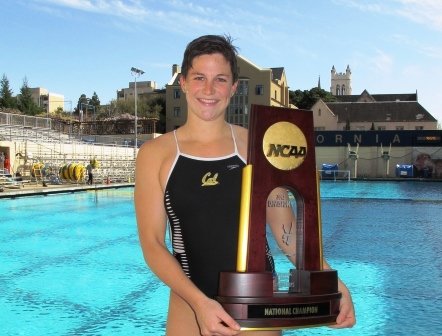 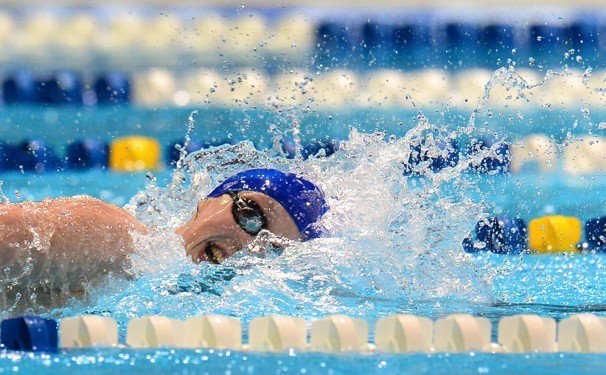 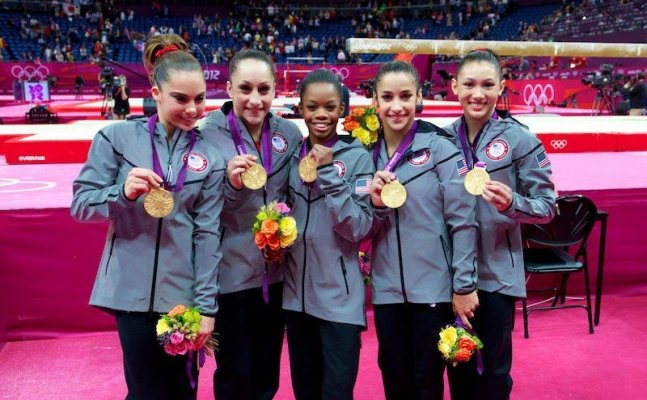 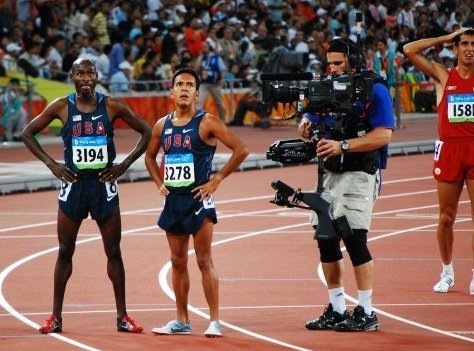 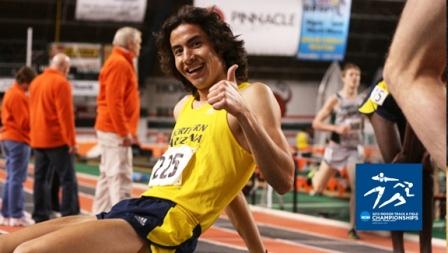 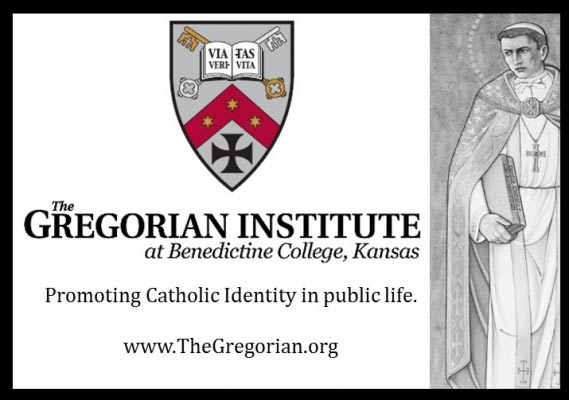 Mariel Zagunis, two-time Olympic gold medalist in fencing, led U.S. athletes in the Parade of Nations. She once said “My faith in God really played an enormous role in my life.”

Lopez Lomong was a Lost Boy of Sudan who came to America with the help of Catholic Charities. He gives God the glory for his great gift at running.

Kathleen Hersey, Olympic swimmer, likes to help children learn to swim. She is adopted and thanks her birth mother for choosing life.

Caitlin Leverenz’s Tucson, Ariz., parish took up a collection to send the family of the University of California bear to London. In an interview, Caitlin talks about the best way to evangelize others in sports.

Katie Ledecky always prays a Hail Mary before she races. She thanks the sisters at Bethesda’s Little Flower school for her faith.

Jordyn Wieber’s (second from left) faith helps her bounce back after disappointments like her narrow miss from individual competition. She helped her team win gold. “Without God in my life, I feel like there would be no meaning,” she said.

Leo Manzano (center) is the small runner with a giant heart who inspires and exhorts the kids at St. Ignatius, Martyr school in Austin. His send-off to London was a Mass.

Diego Estrada was a Focus (Fellowship of Catholic University Students) Bible Study leader at Northern Arizona University, though he is running for Mexico. He says his Catholic faith is the number 1 priority in his life. 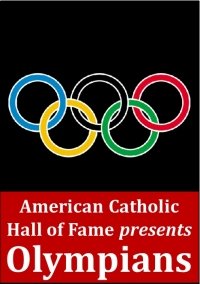 In that spirit, we offer Catholic Olympians and other Catholics of note participating in the London Olympics this summer.

There is no bigger stage in sports, and no quicker route to respect in competition than being an Olympian. The witness of these men and women is sincere and inspiring. They show that you truly do not have to hide your faith to succeed.

Even at the gold-medal level.

Mariel Zagunis, two-time Olympic gold medalist in fencing, led the U.S. team in the Parade of Nations during the2012 Olympics Opening Ceremony in London. After her first Gold medal in Athens she witnessed publicly to her faith. She told the National Catholic Register in 2004:

“My faith in God really played an enormous role in my life, like never before, when I didn’t make the team in March,” the 19-year-old Zagunis said. “It was one of those disappointments in life that causes you to really take a look at what’s real and important and what matters.” 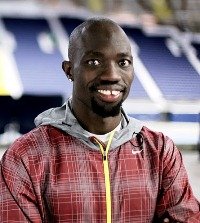 Lomong is one of the Lost Boys of Sudan. Abducted while attending Mass as a 6-year-old, he escaped from a rebel camp when he and other boys crawled through a hole in the fence. “Animals could have killed us or people could have got us and killed us,” he said, “but God was there to protect us.” He came to the United States at the age of 16 and became a U.S. citizen in 2007.

“God blessed me and gave me a lot of strength to be faithful and more determined with my life to overcome obstacles,” he told USA Today. “He had a vision for me. He knew I would come to America and have family.”

Missy may not be Catholic but she gives a great testimony to Catholic education. In this great interview she shares what she thought of Regis Jesuit High School in Aurora, Colo., when she walked in:

“From that first moment, I knew God was with me. Every day over the last three years, my faith has grown. One of my favorite times is going to our beautiful school chapel and spending time with God. This year, I attended Kairos with my Regis Jesuit sisters and it changed my life forever. I now really work on keeping my faith strong.”

Kathleen Hersey is a swimmer who represented the United States in the Beijing Olympics, too. Her race, the 200-meter butterfly, is scheduled for Tuesday, July 31.

Her twitter page includes a Bible verse from the prophet Jeremiah 29:11: “For I know well the plans I have in mind for you — oracle of the LORD — plans for your welfare and not for woe, so as to give you a future of hope.”

Swimmer Caitlin Leverenz’s face filled with joy when she won the bronze in the 200-meter medley at the Olympics. That joy comes from faith.

St. Pius X parish in Tucson, Ariz., confirmed that Caitlin is a parishioner there and that the parish community took up a collection to help the Leverenz family attend the Olympics.

“Applying my faith to my swimming is something I’m still learning every day,” Leverenz said in an interview. “Growing up, my mom always told me, ‘You’ve been blessed with this amazing gift that God has given you, just use it to the best of your abilities.’ I realize more and more now how true that is. The best way I feel I can thank God is to use the gift He’s given me for His glory and not my own.  Whether that be working really hard in practice or reaching out to a teammate who is down, being kind to a competitor, having Bible study and sharing my faith with my teammates or before my races, just saying, ‘This is in Your hands, and I’m going to go and see what happens.’”

Katie Ledecky will compete for the United States in the 800-meter freestyle race. Qualifying heats are Aug. 2; the race is Aug. 3.

Catholic News Service reported on her faith witness: “I always pray right before a race,” Ledecky said. “The prayer I say is the Hail Mary.”

She credited the the Sisters Servants of the Immaculate Heart of Mary, at Little Flower School in Bethesda with boosting her faith, calling them “great role models.” 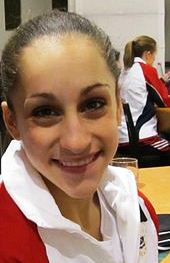 Gymnast Jordyn Wieber was the center of attention when she heartbreakingly failed to qualify individually in gymnastics, not because she wasn’t good enough, but because each nation was limited to two. She bounced back and helped her team win gold on Aug. 1.

Jordyn is featured in the July/August Faith Magazine (Diocese of Lansing) where she says: “I like to look at my gymnastics ability as a great gift from God,” she says. “Without God in my life, I feel like there would be no meaning. She attributes her faith to her parents. “My parents have always made going to Church as a family important,” Jordyn says. “Sometimes we have to split up due to our schedules, but most of the time we are able to get to Mass together.” 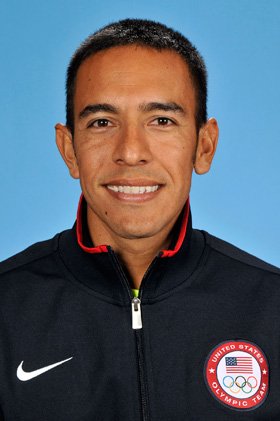 Leo Manzano will be running the 1500m on Friday, Aug. 3. He is a parishioner at a St. Ignatius the Martyr Church in South Austin, Texas. Austin Catholics are celebrating.

Manzano says he first started running by racing with his grandfather as a child. He lost every time, he said, until his grandfather broke his foot. Leo attended Mass as his send-off for the Olympics when he left for Europe. He meets with the elementary school students at St. Ignatius, Martyr Catholic School to talk about his faith and athletics. When he made it to the Olympics, he went to Facebook to thank God, his mother, his father, his sisters and his brother, in that order.

Diego Estrada, a Focus Bible Study leader, is a distance runner competing in the 10,000 meters for Mexico. He was a part of the Northern Arizona University chapter of Focus, the Fellowship of Catholic University Students (Focus was founded at Benedictine College, by the way …).

“Catholicism and Christianity is a big part of my daily life. I wake up with prayer. I go to bed with prayer. Before a race, I pray,” he told the National Catholic Register this year.

Abbot Christopher Jamison of TV fame is the Catholic chaplain to the media.  He called the Olympic Village “a temporary parish.” The Catholic 2012 office told Our Sunday Visitor: “We are ready to welcome the world to our nation and to bear witness to Christ’s love, and above all his peace.”

Brother Colm O’Connell, coach, is “The Humble Irish Monk Who Put Kenya On Top.” The UK Independent recently told the story of the geography teacher who became a running coach.  The report explains: “Brother Colm has been largely responsible for the relentless rise of Kenyan distance running, tapping in to the vast natural talent from the Iten and Eldoret area that has passed through the doors of St Patrick’s, a boarding school for 700 boys of 15 and over.”

Big Pulpit passed on some key Olympic news, including:

John Pius Boland was a two-time Olympic Champion before he became a former Catholic Truth Society. The Catholic Truth Society is a remarkable British organization that publishes tracts that are professional, deep and accessible. I personally credit them with giving me an excellent background in the faith I was rediscovering while studying abroad. My wife buys their publications for her confirmation students.