Martyrdom at the Movies 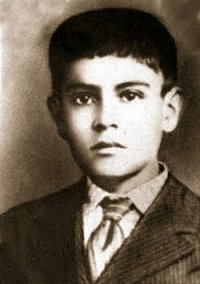 My nearly 10-year-old son is proud of himself: He is the youngest Hoopes child to see an R rated movie.

When I took him to see For Greater Glory with his older brothers and sisters in Kansas City Saturday, I was a little worried. I had seen an advance showing, so I knew the movie’s violence wasn’t worse than Lord of the Rings. The only difference was that this movie featured politics vs. religion instead of orcs vs. elves. But I did figure he would be the youngest person there.

I needn’t have worried. The theater looked like a Catholic conference. Big Catholic families including their littlest members were gathered there to watch the movie about the Cristero resistance to Mexico’s early 20th century persecution of the Church.

The highlight of the movie was a scene that horrified non-Catholics and lapsed-Catholic reviewers but inspired the audience I saw it with.   It depicts the horrifying martyrdom of Blessed Jose Sánchez del Rio. Soldiers removed the skin from the soles of his feet and then made him march to his own grave. Various reviewers have expressed alarm at the scene and the movie’s approval of a child’s decision to undergo torture.

But I’m glad my children saw this Via Dolorosa, which is so much more edifying than the violence in Avengers or Lord of the Rings. After all, we Christians are members of what still in 2011 remained the world’s most persecuted religion. But Americans live in a strange fantasy land right now. On the planet Earth, Christianity is on the rise in a world-wide revolution of freedom and love. In the Western media-frenzied mind, Christianity (the world’s leader in education, health care and service to the poor) is the bully, and the latest attempts to redefine morality are imagined to be new and freeing truths that the bully is senselessly opposing.

On the way home, I told my children to pray for persecuted Christians worldwide … and to learn from the Cristeros’ mistakes.

I told them about another Catholic country that was oppressed by enemies of the Church, and the great man — Cardinal Karol Wojtyla — who stood up for the Church there. He didn’t take up arms. He fully implemented Vatican II, spread the truths of the Gospel, and played a careful game of maximizing the Church’s rights. In the 21st century, the Cristeros are often forgotten, but the “Pope of Peace” changed the map.

I told them about their Mexican grandmother and her parents, who stayed true to their faith despite a quiet persecution against Catholic identity in Mexican public life that lasted throughout their lives. And I told them that we descendants of the Mexicans need to quietly refuse ever to ever be bullied out of living our Catholic identity in the United States.

Last, I told them to learn from Blessed Jose that it is only faith that will make you happy. Throughout history, the world has felt threatened by or disgusted with Jesus Christ and his truth. First, they make Christians the bad guys — they call us enemies of progress or freedom, or they proclaim that our moral positions amount to bigotry. Then, they offer us the oh-so-reasonable option of just forgetting about Jesus Christ and his teachings, and going along with them. Finally, they intimidate and attack.

Jesus himself was killed at a dark point in this cycle. But it always ends the same way: The real bigots are exposed and the world discovers the power and true joy of the Christian option. If we are ever called to follow Christ and our brothers and sisters around the world who are right now being tortured, burned out of home and work, exiled, and beheaded, so be it.

God is real, his joy is lasting, and this world is passing. We can trust that as always he will leave a better world behind us.