Now is the Time to Stand with the Church 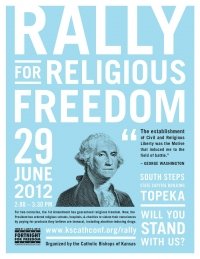 The Rally for Religious Freedom is June 29 in Topeka, Kansas

On June 29, members of the Benedictine College community will join thousands of concerned citizens for the Rally for Religious Freedom in Topeka, Kansas. The rally, which will be held from 2:00-3:00 p.m. on the south steps of the state capitol building, has been organized by the Catholic bishops of Kansas.

The  bishops along with millions of faithful Catholics, non-Catholic Christians, other people of faith, and even those who are non-religious and atheist, are concerned about the contraceptive mandate handed down by the Obama administration’s Health and Human Services Department. The mandate attacks religious liberty in America.

Since the formation of the United States, religious liberty has been at the heart of the national ethos.  President George Washington himself once wrote, “the establishment of civil and religious liberty was the motive that induced me to the field of battle.”

For two centuries, the 1st Amendment has guaranteed religious freedom. Now, the administration has ordered religious schools, hospitals, and charities to violate their consciences by paying for contraceptives, sterilizations and abortifacients.

Regardless of whether you live in Kansas or not, Benedictine College encourages you to get involved in the effort to protect and preserve religious freedom.  Call your elected representatives.  Make your voice known.  Sign the Manhattan Declaration. Rally, protest, and above all, pray.

Kansans who wish to learn more about the rally may do so here.

The fight to protect and preserve religious liberty may be the most critical battle in our nation’s history.

Now is the time to stand with the Church.