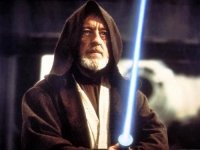 Thirty-five years ago this month,  Star War Episode IV:  A New Hope was released, and Luke Skywalker, Darth Vader,  Jedi Knights, and The Death Star became the ultimate power in the theatrical universe. A decade later, the completion of the wildly popular Star Wars trilogy cemented its place as a record-breaking worldwide success and an indelible trademark of American popular culture.

Of all the denizens of that “galaxy far, far away,” one of the most popular and oft-quoted characters was Obi-Wan Kenobi, the Jedi Master who was part-monk, part-Knight of the Round Table, and an all-wise sage who served as a mentor and father figure to the young hero, Luke Skywalker.

What most people know is that Obi-Wan Kenobi was played by Sir Alec Guinness, an Englishmen known for his brilliant career as a Shakespearian actor and Broadway performer, as well as his Academy Award-winning performance in The Bridge on the River Kwai.

What many people don’t know, however, is that when he was forty-two years old, Sir Alec Guinness became a Catholic—a very committed one.  And, in part, he had G.K. Chesterton to thank for it.

In 1954, Guinness experienced a profound drawing to the Catholic Church while acting in a film version of one of Chesterton’s “Father Brown” mystery novels:  While in costume playing the the role of a priest, Guinness was mistaken for a real priest by a boy from the local town of Burgundy.  Guinness was not fluent in French, and the boy did not notice that Guinness did not understand him,  but reverently spoke to him as the two strolled together for a few minutes.  As the child waved goodbye and left him, Guinness was moved.  The clerical attire he was wearing had appeared to inspire much confidence and affection–and the child’s response to it left a deep impression on Guinness.   Two years later, on March 24, 1956, he was formally received into the Catholic Church.

Guinness’ conversion did not rest on that single emotionally-poignant experience, however.  He became a Catholic after much thought and premeditation. He accepted that the Roman Catholic Church was the Church founded by Jesus Christ, the Son of God and Second Person of the Trinity.  Even before he officially converted, friends and biographers tell us he had been living a more Catholic life than many actual Roman Catholics.  He exercised devotion to Mary, said the Rosary, asked for the intercession of his favorite Catholic saints, and even asked St. Anthony of Padua to loosen the nuts on a wheel.

Like most faithful Catholics, Guinness was not without his trials and temptations.  Throughout his life, he battled homosexual inclinations. Unlike others faced with similar temptations, however, Guinness resolutely pursued the will of God in his life.  He recognized the clear teaching of the Catholic Church.  He pursued closeness with Christ, sought the pastoral encouragement of faithful Catholic priests, regularly availed himself of the sacrament of reconciliation, and remained committed to the amendment of his life.

Nothing was more important to Guinness than his Catholic faith.  For all his rich, storied life and worthy accomplishments, from serving in the Royal Navy and performing on Broadway to winning an Academy Award and becoming an icon of American cinema and popular culture, Sir Alec Guinness wrote this in A Positively Final Appearance:  A Journal:  1996-1998:

If I have one regret (leaving aside a thousand failings as a person, husband, grandfather, great-grandfather and friend — and my lazy, slapdash, selfish attitude as an actor) it would be that I didn’t take the decision to become a Catholic in my early twenties. That would have sorted out a lot of my life and sweetened it. (p. 560)

So, on the thirtieth anniversary of the first Star Wars movie, what sage counsel would the great man who played Obi-Wan Kenobi, Jedi Knight and sworn protector of the universe, give us?

It would not be “May the Force be with you, Luke” but “Hail Mary, full of grace, the Lord is with you!” from the Gospel of Luke.