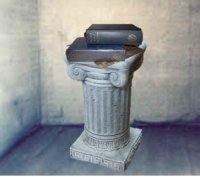 Outside my office door there is a poster portrait of John F. Kennedy. His expression is reflective, fingertips raised pensively to his chin, his musing gaze fixed on the middle distance. The poster also has a quote, which is the reason that some well-meaning soul hung the picture there better than twenty years ago. It’s from a speech that Kennedy made at Amherst College in October 1963, less than a month before his murder:

The poet Kennedy is thinking of is Robert Frost, as it happens, but the identity of any particular poet or artist isn’t really what’s at stake here. This is a very high-flown and abstract sentiment, one that has been pretty widespread for a couple of centuries, and it encapsulates a very noble view of the value of the arts in general and of poetry in particular. Poetry, all by itself, inspires us, enriches us, and guides us toward truth.

The problem, of course, is that this idea is complete twaddle.

I mean, it doesn’t even make sense in the abstract. The ideas, themes, concepts of a particular poem may do all of these things—or it may do none of them—or even serve to subvert any or all of them. The theme that President Kennedy (or his speechwriter; I suspect we can blame Ted Sorensen for this one) advances in this speech as a cultural commonplace is completely, dead wrong, and here’s why: the art of poetry has no intrinsic content.

Once the idea is stated baldly, it’s obvious enough. All of the things that are claimed here for “poetry” in fact belong to the subject, themes and content of the poem itself, not by simple virtue of the fact that they appear in a poem or novel or play, or even by extension in painting, sculpture, film or what have you. Poets and artists can be just as narcissistic, nihilistic, short-sighted, and vicious as anyone else. Relatively few people have found themselves ennobled and uplifted by reading William S. Burroughs or the Marquis de Sade, or even Arthur Rimbaud, talented though they may have been, even impressively so. Leni Riefenstahl’s Triumph of the Will is a great film, but does anyone think it cleanses us of our corruption? It may establish a human truth, all right, but if anything that truth is that art can work in the service of horror about as well as in the service of anything else.

So how is it that an idea this silly has any traction? I blame the Romantics, with a big debt to the mid-Victorians for popularizing it.

Back before the Romantic revolution, the art of Pope, or Milton, Shakespeare, Chaucer—as far back as you care to go–is conceived as art in the service of an external order which is intrinsic, given, hierarchical, fixed, absolute. Major figures of the Enlightenment believed in those things too, but they went a long way toward undercutting them via their intellectual combat with Christianity. The problem is, if you deny a man God, he’ll find something else to worship; as C. S. Lewis wrote, “spiritual nature, like bodily nature, will be served; deny it food and it will gobble poison.”

William Wordsworth spends his youthful career as a poet striving after something greater than himself, but not quite God; something pantheistic, imminent in nature, flowing through all things (sometimes you feel like saying, “Use the Force, William!”). But this mysterious thing is impersonal, however uplifting the vision of it may be from time to time, and ultimately Wordsworth loses track of it, or it of him. He feels it slipping away, and he writes about the fading of his light, his youthful individualistic expressionism; it is the chief tragedy of his poetic career, and he knew it. He laments the loss in poems like his sonnet, “The World Is Too Much With Us”:

The world is too much with us; late and soon,
Getting and spending, we lay waste our powers:
Little we see in Nature that is ours;
We have given our hearts away, a sordid boon!
This Sea that bares her bosom to the moon;
The winds that will be howling at all hours,
And are up-gathered now like sleeping flowers;
For this, for everything, we are out of tune,
It moves us not.–Great God! I’d rather be
A Pagan suckled in a creed outworn;
So might I, standing on this pleasant lea,
Have glimpses that would make me less forlorn;
Have sight of Proteus rising from the sea;
Or hear old Triton blow his wreathed horn.

Poetry is Wordsworth’s access to this lost world of faith, one he cannot quite step back into. [1] Other poets of the romantic era followed suit.

But the crowd I really blame for this is the mid-Victorians, best represented by Matthew Arnold. Under the impact of Darwin, the faith of Arnold and many others in his intellectual strata crumbles completely. Still, they can’t do without reaching for something greater than themselves, so they have a go at replacing Christianity with aesthetics. That attempt produces the kind of quote with which this essay started. In “Dover Beach,” Arnold hears the “melancholy, long, withdrawing roar” of faith (which for Arnold means Christianity):

The Sea of Faith
Was once, too, at the full, and round earth’s shore
Lay like the folds of a bright girdle furled.
But now I only hear
Its melancholy, long, withdrawing roar,
Retreating, to the breath
Of the night-wind, down the vast edges drear
And naked shingles of the world.
Ah, love, let us be true
To one another! for the world, which seems
To lie before us like a land of dreams,
So various, so beautiful, so new,
Hath really neither joy, nor love, nor light,
Nor certitude, nor peace, nor help for pain;
And we are here as on a darkling plain
Swept with confused alarms of struggle and flight,
Where ignorant armies clash by night.

In Arnold’s world, which is the modern secularist’s condition, what’s left to lean on as a transcendent value? He wants to believe in the transcendent value of love and poetry, but he just can’t quite talk himself into it.  If joy, love, light, certitude, peace, and help for pain are all personal illusions, where can he turn? Arnold’s desperate hope, reflected in the Kennedy quote, is that art itself, sheer art, all alone, irrespective of content, can guarantee contact with some transcendent value. Wordsworth hoped the same. Both failed. The solution they offer, aesthetics as transcendent value, doesn’t even really make any sense. But it hangs on as a reflexive defense, a candle in the dark.

Dr. George Nicholas is chair of the English department at Benedictine College (Kan.). His principal areas of study are medieval and Renaissance literature, most particularly Old English poetry, Old Norse sagas, and the works of Shakespeare. He is an enthusiastic electric guitarist; nevertheless, his hearing is still pretty good.

[1] Wordsworth does in fact later convert to a very orthodox version of Anglican Christianity, but let’s face it: his poetry after that isn’t very good, and everyone knew it, including him.