Pope Benedict Gets Real in Lebanon 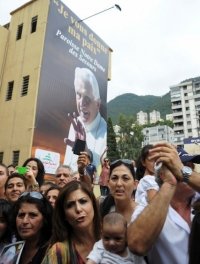 He told them to trust God. He told them to guard themselves against pornography and becoming addicted to social networking. He told them to avoid building their lives around money or consumerism. It could have been any father speaking to any American teenager, but it wasn’t. It was Pope Benedict XVI last weekend —when the American media were reporting attacks on US embassies in the Middle East — speaking to a crowd of young people in Lebanon.

He spoke their language. He did not speak their language by quoting song lyrics or by using slang. He spoke French and he spoke Arabic. But mostly he spoke challenge. He held them to a higher standard. “You are meant to be protagonists of your country’s future and to take your place in society and in the Church,” the Holy Father told them. That means don’t give up when employment looks unlikely and opportunities dwindle.

He didn’t pretend that all was well, but challenged them to put their faith into action: “In Christ you will find the strength and courage to advance along the paths of life, and to overcome difficulties and suffering.” In other words … he invited them to get real.

For Pope Benedict, religion is no opiate. It is not an escape from reality, but a deeper reality that puts the here and now into proper perspective. The higher standard he spoke of was a vision of the world where faith is not some consolation prize for losers, but a powerful force that fuels a “true revolution,” the revolution of love.

He spoke to young people who have known war and threats of terrorism for their whole lives, whose parents and grandparents have known only conflict and division. He spoke to an oppressed minority and did not preach victimhood and recrimination, but sacrifice and redemption. As he has done always and everywhere, the Vicar points to Christ: “He overcame evil not with more evil, but by taking evil upon himself and destroying it completely on the cross through a love lived to the very end.”

He addressed Muslim youth who attended the gathering, and applauded the courage of young Syrians who managed to get there as well. (“Tell your families and friends back home that the Pope has not forgotten you.”) He proclaimed that it is possible to live together in peace because it is possible to love and respect others with whom we disagree.

He had come to sign a document, the conclusions of a meeting of bishops, but the Holy Father is too good a leader to believe in documents alone. He told the young people that the document was incomplete without their fidelity: “This letter will not be written with pen and paper, but with the witness of your lives and your faith.” And he gave them homework. He told them to read the document, and to live it.

Substance versus sound bite, reality versus virtuality, and above all true faith in a true God versus our oft disproved confidence in man’s all-too-fallible power.  Pope Benedict taught us all how to speak to young people with authority, and not as the Pharisees do. All that is left is to take his message to heart and make it real in our lives.