Pope: We’re Human; We Have to Share Our Faith 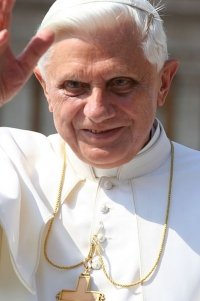 In a brief excursion outside Rome, the Holy Father today shared a key insight that shows why religious freedom is much more than “freedom of worship.”

Pope Benedict XVI went on a trip down memory lane today. He visited the same residence where, 47 years ago, he took part in the discussions that eventually because the Second Vatican Council’s decree on the missions. It is the residence of the Verbite fathers, in Nemi, outside of Rome.

He said that those who planned the meeting “invited me — a very young theologian of no great importance — I do not know why, but it was a great gift for me.”

The Pope recalled the noisy residence he had in the center of Rome (with a beauty of its own, he admitted) but also the contrast to the quieter, wide open spaces and the green rolling hills of Nemi. There was an openness in the dialogue, too. An experience of working with great theologians serving the Church together.

Fulton Sheen was there, whom he said “wowed the evening with his words”, and Yves Congar. It was not a document with great controversy, Benedict said, but there was one disagreement he admits he never really understood, between the school of Louvain and the school of Munster.

Should the missions be most essentially an implantatio Ecclesiae [implantation of the Church] or an announcement Evangelii [of the Gospel]? The reason why the future Pope didn’t understand the mild dispute was not a lack of theological insight. At that he’s always been a whip. It seems to be that for him, there is simply no distinction.

In his short (barely 500 words) discourse to the Verbite priests, the Holy Father goes back to a fundamental principle of classical philosophy: bonum [est] diffusivum sui (the good is diffusive of itself). In other words, it’s the nature of what is good to expand, to spread, to communicate itself. When you have a good experience, you want to share it. The good professors are normally the ones whose courses fill up first.

The Holy Father remarks that the document on missions complements Lumen Gentium, Vatican II’s constitution on the Church. There is a theology of the Trinity at the root, of a God who is good, and therefore a God who communicates Himself, within his trinity of Persons, and also in his work in creation.

“The good is essentially communicatio” said Pope Benedict. And so is Benedict’s God.

To announce the Good News of a God that has come to save us, and to implant a Church who continues and embodies that same mission on earth, spreading that goodness of grace through saving works, are two sides of one and the same coin.

Christianity inherits something very fundamental from Judaism. The practice of both religions and their moral code boil down to one tenet: Be like God. Live like He does. And His inner life, Christ has come to reveal, is one of self-giving and communicated goodness.

In our day, there is a push to distinguish religious practice between worship and public expression. Religion is all fine and good, but it shouldn’t spill out beyond the church parking lot. What you do in the privacy of your own home, or the collective home of your worshipping group, is your business. Religious motivation is suspect, if that is the root of your actions or political stances. Because, in the end, it is purely emotive, so go emote on your own and get it out of your system.

In his short words, recalling an unforgettable experience of lived communion in the faith and in the mission of the Church, the Holy Father reminds us of something he never ceases to repeat in one way or another.

If we are to be like a God who is goodness itself, then there can be no false divide between our worship and our life. For the good to be canned and packaged violates its own nature. It cannot be contained, for its very nature is to communicate itself.

Our God is not a solitary, lonely being; He is a community of persons. To announce that truth implies building a community, an assembly, an ecclesia. Not to share that, not to build community around those basic truths, is to dishonor Him. The false distinction between worship and public practice of religion would have us do what Christ told us was a royal road to perdition: Pay God lip service alone. Religious freedom demands that we live out, in all we do, the truths we profess together. Anything less is shackles on the soul.

Dr. Edward Mulholland was born in the Bronx, New York. He earned his master’s degree in classics from the University of London, England, and received both a licentiate and a Ph.D. in philosophy from the Pontifical Gregorian University in Rome. He is currently Asst. Professor of Classical and Modern Languages at Benedictine College in Atchison, Kansas, where he lives with his bride Valerie and their six children.