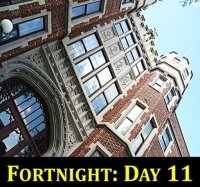 I had stopped practicing my faith 25 years ago when I happened into the Great Books institute that Father Joseph Fessio started in San Francisco. The institute changed that. By reading the greatest thinkers in history, we learned that truth was knowable, that human choices have eternal consequences, and that the exciting intellectual fads of our time were neither new nor freeing.

I and many others returned to the sacraments. And once we returned, our faith wasn’t just a private thing. We tried to find positive ways to make it reach the world. I met a network of alumni from my institute and schools like it in Washington, D.C., where I became a congressional press secretary, and in the Catholic press, where I became executive editor of the National Catholic Register. I couldn’t have done either without them.

For years, my wife urged me to look for work in higher education. Finally, in 2009 I did. I had read all about Benedictine College in Atchison, Kan., in the Register.

So I started working at Benedictine College, teaching in the Journalism and Mass Communications Department, publishing articles as Writer in Residence for the school, and editing The Gregorian speech digest and blog.

With the Gregorian Institute, the school is engaged in the intellectual and moral battles of our time, equipping Catholic leaders with the kind of in-depth formation that is so vital, and that only higher education can provide.

A few examples of speeches we have shared in The Gregorian:

Cardinal Christoph Schonborn, who edited the Catechism, chose Benedictine College to deliver his speech about faith and science: “Pope Benedict, Regensburg, and the Controversy of Creation and Evolution.”

Gov. Sam Brownback, Governor of Kansas, gave a moving testimony of how Mother Teresa’s fearless living of her Catholic identity in public life changed his life, helping bring him into the Catholic Church.

Father Robert Spitzer, S.J. came to Benedictine College fresh from a CNN debate with Stephen Hawking, and showed how “it is both reasonable and responsible to believe on the basis of physics that there is a very powerful and intelligent being that caused our universe to exist as a whole.”

Dr. Robert George delivered his speech “The Life of Faith and the Moral Life” on campus, challenging students: “Perhaps Christ is looking at you or me, with love, and asking us to put at risk our reputations or prospects for career advancement.”

George Weigel delivered his speech “Defending Religious Freedom in Full: A Generation’s Challenge,” saying, “If religiously informed moral argument is banned from the American public square, then the public square has become, not only naked, but undemocratic and intolerant.”

Future editions of The Gregorian will feature speeches by Barbara Nicolosi, who brings Catholic truths to Hollywood, and Sister Joseph Andrew Bogdanowicz, OP, the Catholic scholar who was featured on “Oprah.”

The Gregorian website is a kind of companion to The Gregorian. Launched on Sept. 3, 2011, the feast of St. Gregory the Great, the website was writing about the contraception mandate when it was a threat, not a storm — and we even scored some scoops.

The excellent journalism and commentary on the Gregorian website has received national notice.