Put an Image of Our Lady of Guadalupe in Your Church 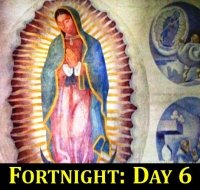 How can we promote a more Catholic future for America? Evangelize Latinos with those things only the Catholic Church can offer — the sacraments, the Blessed Mother, and popular Catholic devotions.

Americans have had great success getting Hispanic Catholics to go to church on Sunday … Protestant Americans, that is. One religious studies professor points out that there are more Latino Protestants in the United States than American Jews, Muslims, Episcopalians or Presbyterians.

Regardless their Mass attendance, though, 7 out of 10 Latinos still consider themselves Catholic. For now.

Some fear that Latino immigrants don’t assimilate into American culture as they should. In certain respects that may be true, but if swapping Catholic identity for American consumerist identity is assimilation, it would seem that Latinos are assimilating very well indeed. As generations of Latinos stay longer in America, their tendency to call themselves religious drops precipitously.

We can’t afford for Latino Catholics to leave the Church or leave Christianity altogether. Too much depends on them.

In many ways, the state of Europe is a sign of things to come for America.

At the turn of the century, census figures painted a stark tale. Italy is emblematic of the problem, with a fertility rate of less than 1.4 children born per couple, far below the 2.1 necessary to replace the national population. Italians will become minorities in Italy in the first half of this century. It is not unthinkable that Italy could become a Muslim country in our children’s lifetimes.

America is better off in the baby-making department — but not well off. Our fertility rate is also below replacement rate. The Economist recently summed up the situation in America as “The Baby Bust” and reported that 2010 was a record low year in America for births.

What has saved the United States from depopulation problems is its high level of immigration. And in our case, immigrants don’t come from Muslim lands, but from the majority Catholic countries to our south.

That means the Catholic Church is America’s best hope to assimilate the new immigrants in such a way that they become patriotic Americans who ascribe to the moral vision of our founding fathers.

No, seriously. Our Church has become very articulate about America’s founding principles during this Fortnight for Freedom — take Los Angeles Archbishop José H. Gomez for example. And after all, the Catholic Church has practice turning immigrant people into good Americans. My family used to live in Connecticut, where the phone book, and local ballots, were filled with Italian names. Through the Knights of Columbus and other organizations, Catholic immigrants accepted America’s principles of self-government.

Can we do the same thing today? I think so. Sometimes we overthink the issue of Evangelizing Catholic Latinos. I don’t want to oversimplify it either. But the best way to evangelize immigrants is the way the Church did it last time: Encourage the devotions that the immigrants already have, and add catechesis on the sacraments.

Those devotions will vary by country of origin. They will have to be accompanied by catechesis in the sacraments.

But a great starting place is one thing all of us Catholics in the New World have in common: We love Our Lady of Guadalupe.

The image of the Blessed Mother as she appeared to Juan Diego (and appeared on his tilma) is the identity badge of Catholic Latinos. In his post-synodal apostolic address Ecclesia in America (the Church in America), addressed to all the Americas, Pope John Paul II named Our Lady of Guadalupe Patroness of all America and “Star of the first and new evangelization.”

He said: “America, which historically has been, and still is, a melting-pot of peoples, has recognized in the mestiza face of the Virgin of Tepeyac, ‘in Blessed Mary of Guadalupe, an impressive example of a perfectly inculturated evangelization.’”

Reaching out to Hispanics is a duty for the Church in America. It’s also a great investment. As anyone who watched the movie “For Greater Glory” knows, when our friends to the south embrace the faith, they don’t hold back.

Pope Benedict XVI found that out on his recent visit there.

On the Vatican website’s list of formal addresses and homilies and messages from his trip to Mexico, there is an unusual entry for March 25, titled “Address improvised by the Holy Father on Sunday Evening in front of Miraflores College.”

I’ll leave you with what he said.

“Dear friends, thank you very much for your enthusiasm. I am so happy to be with you. I have accomplished many journeys but I have never been received with so much enthusiasm. I will bring with me, in my heart, the impression of these days. Mexico will always be in my heart. I can say that for years I have been praying every day for Mexico, but in the future I will pray much more. Now I can understand why Pope John Paul II said: ‘I feel I am a Mexican Pope.’”