Religious Freedom? Talking Back to Obama at the U.N. 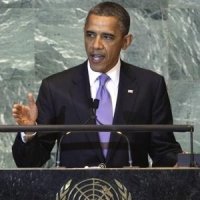 President Barack Obama found himself speaking to the United Nations about religious freedom yesterday. He raised the issue because of the murderous riots in Libya and elsewhere over the weekend.

So, when he praised religious freedom … we wondered, “How about ours?”

Obama to the U.N.: “True democracy demands that citizens cannot be thrown in jail because of what they believe, and that businesses can be open without paying a bribe.”

Obama to the U.N.: “It depends on the freedom of citizens to speak their minds and assemble without fear, and on the rule of law and due process that guarantees the rights of all people.”

Catholics to Obama: Why were our voices ignored when we followed due process to tell you what we felt about the HHS mandate during the comment period? And will you guarantee Catholics’ rights not to act against our consciences? Why did you not give our Army Chaplains the freedom to speak their mind on this subject?

Obama to the U.N.: “[T]rue democracy, real freedom is hard work. Those in power have to resist the temptation to crack down on dissidents. In hard economic times, countries may be tempted to rally the people around perceived enemies at home and abroad, rather than focusing on the painstaking work of reform.”

Catholics to Obama: Mr. President, why has your campaign cast members of my Church as waging a “war on women”? Why did you focus so much of your political convention on building the case for that war?

Obama to U.N.: “In every country, there are those who find different religious beliefs threatening. In every culture, those who love freedom for themselves must ask themselves how much they’re willing to tolerate freedom for others.”

Catholics to Obama: How much are you willing to tolerate the freedom of Catholics? Will you tolerate our beliefs regarding contraception and abortifacient drugs?

Obama to U.N.: “We not only respect the freedom of religion, we have laws that protect individuals from being harmed because of how they look or what they believe.”

Catholics to Obama: Why don’t you give us the conscience protections you promised at Notre Dame? Why won’t you protect our right to believe that contraception and abortifacient drugs are wrong?

Obama to U.N.: “But when you strip all away, people everywhere long for the freedom to determine their destiny; the dignity that comes with work; the comfort that comes with faith; and the justice that exists when governments serve their people and not the other way around.”

Catholics to Obama: Just to be clear, are you also okay with faith beliefs that don’t comfort us, but challenge us, as the truth often does?